All matches will be streamed live on Volleyball TV

The biggest stars in international women’s volleyball are already preparing to return to action with the 2022 FIVB Volleyball Women’s World Championship just 50 days away. In less than two months, the leading players of the Volleyball Nations League will be joined by big names from other countries qualified for the competition for the highlight of the 2022 national team season.

The 19th edition of the Women’s World Championship will take place in the Netherlands and Poland. Matches will be played across three Dutch and three Polish cities between September 23 and October 15.

All 16 teams that competed in the VNL earlier this year will also play for the world title – Belgium, Brazil, Bulgaria, Canada, China, the Dominican Republic, Germany, Italy, Japan, Korea, the Netherlands, Poland, Serbia, Thailand, Türkiye and the United States. Joining them in the tournament, which will feature countries from all five continents, will be Argentina, Cameroon, Colombia, Croatia, the Czech Republic, Kazakhstan, Kenya and Puerto Rico.

The first ten days of the event will feature the first phase of the tournament. The 24 qualified teams will be split into four pools, hosted in Arnhem, Gdańsk and Łódź. After each team completes its five-match schedule, the four best-ranked squads in each pool will move forward to the second phase.

Played across six days, from October 4-9, in Rotterdam and Łódź, the second phase will see the 16 remaining teams form two groups. Each team will play only four matches, against teams they did not face in the first phase, and again the four best in each pool will move forward. 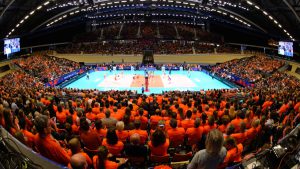 Apeldoorn will set the stage for the gold medal match

Tickets for the World Championship are already on sale for the matches in Poland https://www.ebilet.pl/en/sport/sporty-druzynowe/womens-world-championship/ and the Netherlands https://rb.gy/yd68e4