Eleven teams will strut their stuff in the eight-day tournament

Bangkok, Thailand, August 2, 2022 – After successfully hosting the 14th Asian Women’s U18 Volleyball Championship and the “Princess Cup” 3rd AVC Women’s Challenge Cup in June, Nakhon Pathom becomes a battleground for another major competition, the 2022 AVC Cup for Men at Nakhon Pathom Provincial Gymnasium and Hall 2 T.R. Rattanakosin between August 7 and 14. 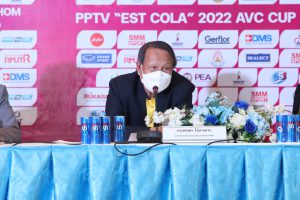 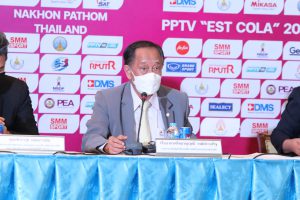 In his speech, TVA President Mr Somporn said, “Nakhon Pathom was chosen as the host province for the 2022 AVC Cup for Men because it has organised several major tournaments. With such a great experience, Nakhon Pathom is well-prepared in terms of event facilities and well-qualified personnel. In addition, with the strict COVID-19 preventive measures as well as the health and safety protocol, I’m positively convinced that this tournament will be a significant success without  the spread of the coronavirus among the players and team officials from Thailand and overseas. I also hope high that a fruitful organisation of the AVC Cup for Men will not only impress all visiting teams but also help demonstrate the Thailand’s capacity.” 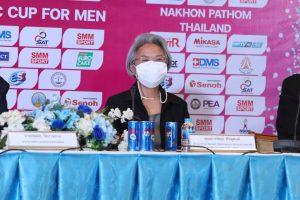 Ms Tantip said, “To promote this thrilling tournament, various fun activities will be held in front of the competition venue and fans can hunt for attractive prizes from main sponsor Est Cola. I strongly hope that volleyball enthusiasts will come support their favourite teams at the venue and watch live broadcast through PPTV.” 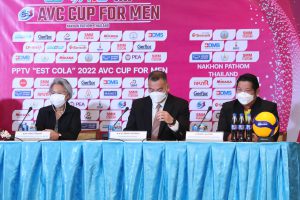 Regarding the preparation of host province Nakhon Pathom, Lt Col Dr Sinthop said, “We have already hosted two major events in June with many strong teams participating. I’m upbeat that with our great experience in hosting those events, we will make another success in organising the 2022 AVC Cup for Men. Our Nakhon Pathom province is ready to show our capacity in hosting this tournament and other major competitions in the near future.” 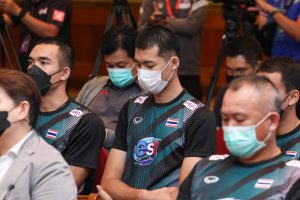 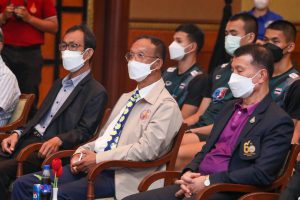 Meanwhile, a strong field of 11 countries actively confirmed their participation in the 2022 AVC Cup for Men. The continent’s top-tier event is contested biennially by the top senior men’s national teams of the AVC affiliated National Federations. 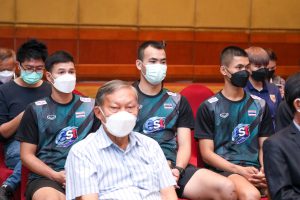 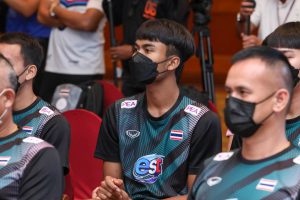 Participating teams consist of hosts Thailand, Korea and Hong Kong, China in Pool A, with Iran and Pakistan in Pool B.  Pool C features Japan, Australia and India, while Chinese Taipei, China and Bahrain are in Pool D.

Teams will test their mettle in the pool round-robin preliminaries from August 7 to 9. August 10 is the rest day. The competition resumes the following day, with only top two teams from each pool advancing to the round of last eight on August 11-12 (teams from Pool B and Pool D contest round-robin Pool F and those from Pool A and Pool C will be pitted in round-robin Pool E). Teams finishing 3rd in the pool preliminaries will contest the classification round for 9th-11th places.

Only top two teams from Pool E and Pool F will next face off in the cross semifinals, while those finishing 3rd and 4th places from both pools will be relegated to classification round for 5th-8th places. The final round will be held on August 14, followed by the awards presentation and closing ceremony on the same day.

Thailand is hosting the AVC Cup for Men for the third time in history. Nakhon Ratchasima hosted the inaugural edition in 2008, with Nakhon Pathom organising the topflight competition in 2016 and 2022. In fact, the 2022 edition was due to take place in Chinese Taipei, but because of its strict COVID-19 protocols, Thailand came in place to host the tournament. 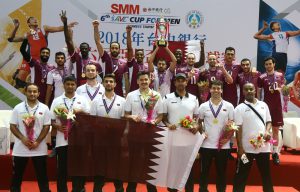 The previous edition took place in Chinese Taipei in 2018 when Qatar captured the limelight after pulling off a stunning 3-2 victory against title-holders Iran in the final showdown. Japan also surprised hosts Chinese Taipei 3-2 in the third-place playoff clash to bag hard-earned bronze medal.

The 2020 edition was due to be held in Nay Pyi Taw, Myanmar but was eventually cancelled due to grave concerns over the COVID-19 pandemic. 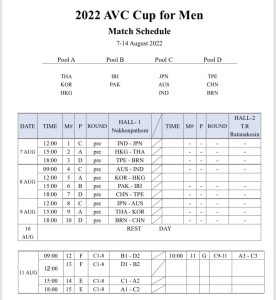 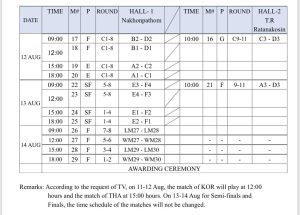