Seeded fourth in the FIVB World Tour, Agatha and Duda secured their fifth international gold medal together with a 2-0 (21-19, 21-18) win in 42 minutes over the top-seeded Klineman and Ross to collect the $20,000 first-place prize and 800 qualifying points for the Tokyo 2020 Olympic Games.

“After losing twice in the pool, we had to do something,” said the 36-year-old Agatha. “We had good discussions with our coaches, and we came back and played smarter. You saw the worst of us early, and the best of us in the last four matches. This is a big win for us as we are battling the other good teams in Brazil for a spot in Tokyo 2020.”

In the Brazilians’ last four matches, Agatha and Duda outscored their opposition by 52 points with an average set score of 21-15. The gold medal was Agatha and Duda’s second this season with the first being on June 2 in the Czech Republic at the Ostrava Open.

Sunday’s win also evened the series between the two teams at 3-3 with Agatha and Duda winning the last two matches with the Americans, including a quarterfinal victory on June 1 in the Czech Republic event.  For placing second, Klineman and Ross split $16,000 and earned 720 Tokyo Olympic qualifying points.

The Brazil versus United States women’s finale was the 101st between the two countries as the Tokyo Open marked the 412th World Tour event since the start of FIVB-sanctioned events for the gender in August 1992.  The Americans lead the title series 55-46 with Klineman and Ross’ win  the last meeting between the two countries two weeks ago in Switzerland when the pair defeated Maria Antonelli and Carolina Salgado in the Gstaad finale.

In the women’s bronze medal match, 12th-seeded Heather Bansley and Brandie Wilkerson of Canada posted a 2-0 (21-19, 21-11) win in 39 minutes over 18th-seeded Karla Borger/Julia Sude of Germany to collect the $10,000 third-place prize.  It was the second win this season for the Canadians over Borger and Sude, who received $8,000 for finishing fourth.

The women’s FIVB World Tour returns to Europe starting Tuesday with a double gender Beach Major Series stop in Vienna. The 2018-2019 FIVB season concludes from September 4-8 in Italy with the $600,000 World Tour Finals at Rome for men and women 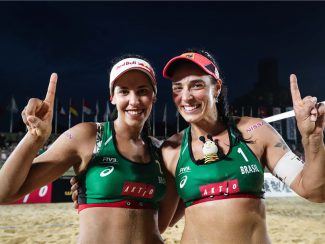