Tokyo, Japan, July 28, 2019 – Although this gold medal is not the one they covet the most in the Japanese capital, Anders Mol and Christian Sorum are still elated to top another international podium as the young Norwegians collected their sixth FIVB Beach Volleyball World Tour title this season and ninth overall here Sunday at the $300,000 Tokyo Open.

Seeded first in the dress rehearsal event for next year’s Tokyo Olympic Games where the Norwegians rank as one of the favourites to win the 2020  gold medal, Mol and Sorum posted a 2-0 (21-17, 21-18) win in 38 minutes over 15th-seeded qualifiers Nils Ehlers and Lars Fluggen to capture the $20,000 first-place prize.

With Sunday’s finale being the 442nd men’s World Tour gold medal match, it marked the 71st time that two European teams competed in the title contest since the start of international play in 1987. Mol and Sorum are now 3-0 in those all-European men’s finales.

In winning Sunday, the 22-year-old Mol and 23-year-old Sorum became the fastest European men’s or women’s team to win nine FIVB gold medals as the Tokyo Open was the Norwegian’s 26th World Tour start together. The German women’s team of Laura Ludwig/Kira Walkenhorst won their ninth title in their 38th FIVB appearance with Latvians Aleksandrs Samoilovs/Janis Smedins securing No. 9 in their 46th World Tour appearance.

For the 25-year-old Ehlers and 29-year-old Fluggen, who had to win a qualifying match in Wednesday to earn a berth in the Tokyo Open main Draw, the Germans’ split $16,000 for placing second to secure their best finish together on the FIVB World Tour.

In the bronze medal match, ninth-seeded Alexander Brouwer and Robert Meeuwsen of the Netherlands defeated fifth-seeded Alison Cerutti/Alvaro Filho of Brazil 2-0 (21-12, 21-17) in 43 minutes. The Dutch split $10,000 for third-place and Alison and Alvaro shared $8,000.

In improving their FIVB record to 2-0 over the Brazilians, Brouwer and Meeuwsen ensured an all-European FIVB World Tour podium for the 41st time.

With a World Tour men’s event also being played in Italy this weekend where teams from Austria, Russia and South Africa in the semifinals, the FIVB circuit will stage three events this coming week highlighted by the double gender Beach Major Series stop in Austria starting Tuesday in Vienna. 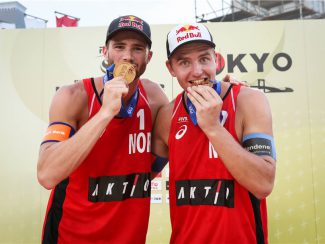