Bangkok, Thailand, March 17, 2019 – Air Force VC reclaimed the men’s title and Nakhon Ratchasima The Mall VC captured the women’s crown as the curtain of the 2018-2019 Thailand League Volleyball Tournament came down on Sunday at the packed MCC Hall, The Mall Bangkapi here.

Air Force will represent Thailand in the Asian Men’s Club Volleyball Championship in Taipei, Chinese Taipei from April 18 to 26, while Generali Supreme, despite a second-place finish to eventual champions Nakhon Ratchasima The Mall VC, received the green light from the Thailand Volleyball Association earlier to prove their talents at the 2019 Asian Women’s Club Volleyball Championship in Tianjin, China from coming April 27 to May 5.

In the women’s event, Nakhon Ratchasima were invincible as they went through the entire season unbeaten, claiming the Thailand League title for four times as they had already won it in 2006, 2007, 2014 and now 2019. 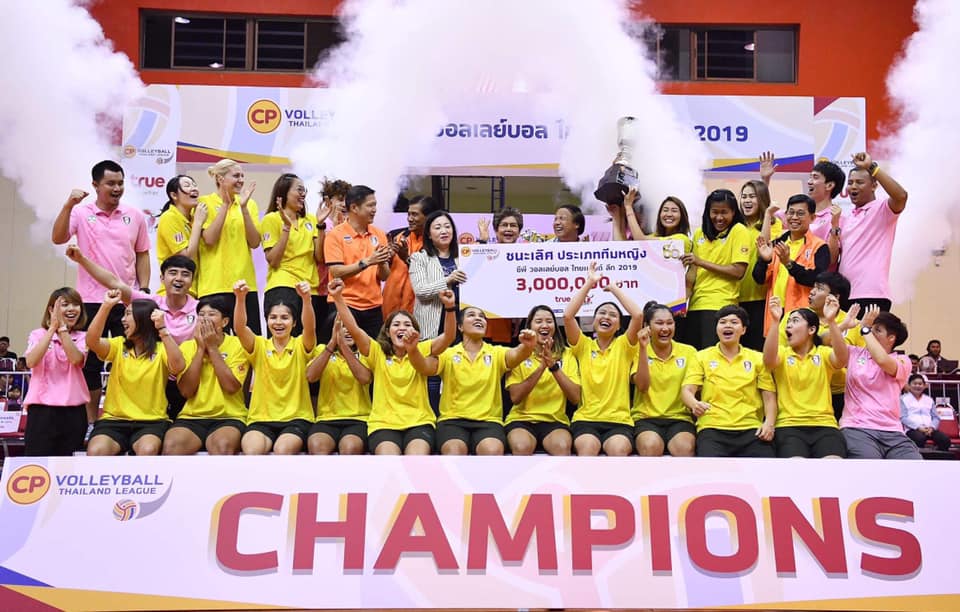 Nakhon Ratchasima remained in dazzling form, with Yeliz Basa’s brilliant individual display guiding the star-studded side to victory over the spirited Supreme.

In the men’s event, Air Force defied the odds to stun red-hot favourites Diamond Food Saraburi 3-1 (25-22 17-25 25-16 25-18) in the Sunday’s showdown. Saraburi had been regarded as the strongest team in this season, losing only one 1-3 match to Rajamangala Lanna Phitsanulok VC in their home-and-way, round-robin two-leg competition.

The Air Force’s dramatic 3-1 win over Diamond Food Saraburi was a sweet revenge for their 1-3 and 2-3 losses in the first two matches they had met in the two-leg competition.