Al Ahli Club ended their first-round campaign of the Bahrain’s Isa Bin Rashid Volleyball League on high note after finishing on top of the table.

Al Ahli managed to win four matches with only one loss to lead the strong 6 teams contesting the competitive League with 12 points. Al Najma and Darkulaib came in second and third places respectively, with Al Nasser trailing in fourth position. Al Muharraq and Nabih Saleh came in respective fifth and sixth places. 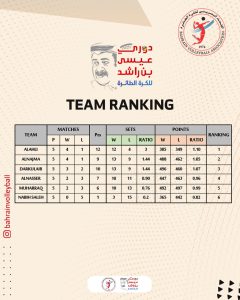