The final was held behind closed doors to limit the spread of the COVID-19. Al-Ahli had qualified for the final clash for two times in a row including the previous season, where they went down to eventual winners Al-Arabi in the final match.

Qatar Men’s League champions Police, runners-up Al-Ahli, third place Al-Arabi and fourth place Qatar joined the fray in the Qatar Cup 2020-2021 season, which had been held between February 11 and 19.

This season, Al-Ahli struggled to beat defending champions Al-Arabi 2-1 in the first round, where only teams winning two matches would make the cut for the final.

In the Friday’s final showdown, Al-Ahli remained in superb form to beat Police, which had in January captured the Qatar Senior Men’s League title for consecutive three times, in thrilling four-setter 22-25, 26-24, 25-20, 25-19.

After the match, Mr. Ali bin Ghanim Al-Kuwari, President of the Qatar Volleyball Association and Western Asia Zonal Association, presided over the awards presentation. Also in attendance were Yousef Ahmed Kano, QVA Secretary General, and Mohammed Salem Al-Kuwari, QVA Member of the Board of Directors. 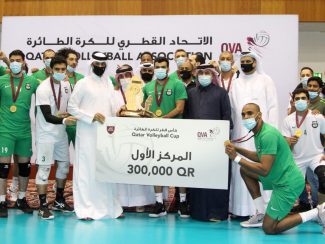