AL-ARABI, AL-RAYYAN TO BATTLE IT OUT FOR AMIR CUP TITLE

Bangkok, Thailand, April 3, 2021 – Title-holders Al-Arabi and Al-Rayyan set up a final clash in the Qatar’s Amir Cup following their clean sweeps in the best-of-three semifinals.

Police, Al-Arabi, Al-Rayyan and Al-Ahli advanced to the best-of-three semifinals following their scintillating wins against respective rivals in the quarterfinals earlier.

In the first leg of the semifinals on April 1, Al-Arabi pulled off a stunning 3-0 win over Police as Al-Rayyan struggled to beat Al-Ahli in hard-fought four-setter.

In the second leg of the semifinals on April 3, Al-Arabi produced an epic comeback win over Police. The defending champions lost the first two sets 22-25, 22-25, but hit back to take the remaining three sets 25-23, 25-16, 19-17. With two straight wins, Al-Arabi secured their berth for the final showdown on April 7.

Al-Rayyan also proved their class in the second match against Al-Ahli, brushing off the unfancied rivals in straight sets 25-20, 25-15, 25-17 for two wins in a row to advance to the final.

According to the rules and regulations, if any team hold their rivals to a 1-1 draw (following one win on April 1 and one loss on April 3 or vice versa), the third match will take place on April 5 to decide the eventual two winning teams for the finalists.

However, both Al-Arabi and Al-Rayyan swept wins in both semifinal matches to eventually advance to the final on April 7. 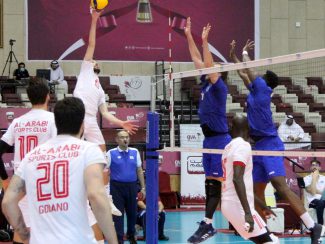