Bangkok, Thailand, October 31, 2020 – In what a roller-coaster best- of-three semi-finals, Al Arabi rallied throughout to get the better of Al-Rayyan and set up a final clash with Police SC in the Amir Cup Volleyball Tournament at the Qatar Volleyball Association Hall in Al Gharafa on Wednesday, QVA reported on volleyball.qa on Thursday.

For Al-Rayyan, Abo Naboot Belal Nabi (25) and Costa Marcus Vinicius (20) contributed majorly. The final between Police SC and Al-Arabi SC will be contested on Saturday, October 31 at 6pm local time.

Al-Arabi entered the tournament with the aim of winning and achieving the title they missed for several times, especially in recent years, as their last victory in this championship was in the 2015/2016 season, and they are record holders in terms of the number of wins with 22 titles.

Police are seeking to win the championship title for the first time in history, as they qualified for the final more than once in recent years, but did not win the title as they finished second for four times including last year against Al-Rayyan, which won the title 13 times.

Police qualified for the final match after winning back and forth over Qatar Club in straight sets in both matches in the best-of-three semi-finals.

Al-Rayyan are the champions of the Volleyball Championship of His Highness the Amir Cup for the past three seasons.

The matches of this tournament are played at a time when the QVA, during the tournament, is keen to implement strict precautionary and health measures, in order to protect everyone from the Coronavirus (COVID-19), as all participants in the management and organization of these matches, players, referees, administrators and workers have to undergo the medical swab ahead of the competition. 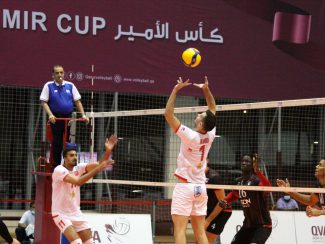