Bangkok, Thailand, October 30, 2020 – Wu Sheng, a former Chinese national men’s volleyball player, was appointed as the head coach of the Chinese men’s team, whose major aim is to qualify for the 2024 Paris Olympics, xinhuanet.com reported on Thursday.

Earlier this year, the Chinese men’s volleyball team missed out on the last Asian ticket to the Tokyo 2020 Olympic Games, after losing in straight sets to Iran in the final showdown of the 2020 AVC Men’s Tokyo Volleyball Qualification on home soil in Jiangmen in early January. The team has never secured an Olympic berth, except as hosts at Beijing 2008.

Lai Yawen, deputy director of the Management Center, said the Chinese men’s volleyball team should waste no time preparing for the 2024 Paris Olympics.

“Wu is experienced in coaching and strict in managing. He has a comprehensive knowledge of the development of volleyball at home and abroad. We believe that he will lead the team to make a roaring comeback,” added Lai.

Wu started his coaching career in 1993. In 2014, he led the Zhejiang women’s team to triumph in the Chinese volleyball league.

“Compared to other players of some strong Asian teams, Chinese players are physically good, but need improvement in basic techniques and skills. We will figure out a proper tactic to bring our strength into full play,” said Wu.

A 25-player training list, that includes players from eight provincial teams and the People’s Liberation Army team, was also announced.

“The new team’s goal is to get stronger in Asia, and to win a ticket for the Paris Olympics,” said Li Quanqiang, the director of the Management Center. 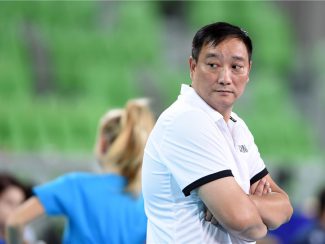