The top three teams of the FIVB World Ranking took the medals at the Katara Beach Volleyball Cup 4-star in Doha. Second-seeded Alix Klineman and April Ross of USA claimed the historic first Doha gold for women, their fifth on the FIVB Beach Volleyball World Tour so far.

The number one pair in the world, world champions Sarah Pavan and Melissa Humana-Paredes of Canada settled for the silver. They now have 11 World Tour medals on their belt.

Third-seeded Brazilians Agatha Bednarczuk and Eduarda Santos Lisboa claimed third place and the bronze. It was their 16th medal out of 33 participations on the World Tour.

Full of fresh energy and desire for victory, both teams entered the gold medal match engaging in a tough point-for-point battle. Halfway through the first set, Alix and April reacted to a four-point breakaway by Pavan and Melissa with a five-point run of their own. And it was a battle for every point again, with frequent changes in the lead into the money time, when the Americans denied the first set point for the Canadians and April hit the winner for 22-20. The tight fight continued in the second set, but towards the end of it Alix and April put more precision into their game and edged out to a 2-0 (22-20, 21-18) victory.

“It means so much! We are so grateful to be here. We felt so welcome here. It was an amazing tournament, amazingly run, and to come out on top, especially at the first event in so long is so exciting. We worked as hard as we could work and it still feels like there is a lot of room for improvement. Against that team, it’s really tough and I felt like we pushed each other. So we are going to take notes, go back and continue to work hard,” April said right after receiving the trophy.

“It was amazing to be back! A little strange to be on the court again, but the feeling is really good. We are continuing to get better and better as we play more and more. This was an amazing starting point, but by no means are we happy and satisfied, so we want to get back to work and improve even more,” said Alix.

Agatha and Duda stormed into the first set of the bronze medal match against USA’s Emily Stockman and Kelley Kolinske with a 5-0 run. The Americans tried fighting back, but the Brazilians held their ground to win the set with a difference. The second set was a little more competitive. Still, Agatha and Duda stayed well in control of the scoreboard and cruised on to a 2-0 (21-13, 21-14) win.

“We are feeling very well. We lost twice in this tournament, so we felt a little bad about it. But we thought a lot about what we were doing wrong, and when we came back for the bronze medal match, we put in all our energy and our intelligence, because it was very hot and windy and playing in the wind is difficult. The tournament was perfect. We were in a safety bubble and we could focus on our game.

Everything worked perfectly and I hope we’ll have many more tournaments on the calendar,” 37-year-old Agatha said. 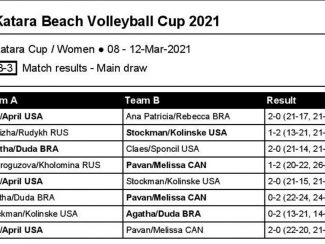