The Czechs triumph in Qatar undefeated

Ondrej Perusic and David Schweiner continued their winning streak through the men’s final of the Katar Beach Volleyball Cup 4-star in Doha and brought their fairy tale to a happy end. The 14th-seeded Czechs won their first ever gold on the FIVB Beach Volleyball World Tour.

In their first World Tour event as a team, Brazil’s Evandro Goncalves and Gustavo Carvalhaes (Guto) took the silver medals.

Fourth-seeded Taylor Crabb and Jacob Gibb of USA grabbed the bronze. It was their second World Tour medal, after their Chetumal 4-star gold in 2019.

The first set of the gold medal match was very competitive through 10-10, after which Perusic and Schweiner broke away on a four-point run and never looked back. Some efficient blocking by Schweiner helped them stay in the lead until Perusic hit the set winner. They opened up a wide lead early into the second set and seemed to be cruising comfortably to the victory. However, Evandro and Guto took advantage of some unforced errors to level it at 17-17. The Czechs, however, stayed intact and pushed forward to a 2-0 (21-16, 21-19) win.

“We were not expecting it and I cannot really describe the emotions and feelings that we currently have. I’m really happy with our performance during the whole tournament, because finally it was not ups and downs. We had no downs, apart from my side-out in the second set of the final, and I’m really happy with this,” Schweiner said holding the trophy.

“It was really hard, especially in the second set, when the victory is really close and real. I think for the whole tournament we were the underdogs and we had nothing to lose. So when you are leading 1-0 and, I don’t know, 16-10 or 16-9, it’s really tough to control ourselves and focus on the side-out. I’m really glad that we did in the end and, despite the fact that the Brazilian guys came back strong, we were able to finish it. We are really looking forward to the three tournaments in Cancun and I hope we can continue with the good performances,” Perusic added.

In an all-American classic for the bronze between players at a combined age of 156, Crabb and Gibb totally dominated over the first set against Nick Lucena and Phil Dalhausser to win it by a huge margin. The second, however, was a hard-fought battle. In the money time, Crabb and Gibb had to deny two set points for Lucena and Dalhausser before setting foot on a 2-0 (21-9, 23-21) win.

“This is huge! We’re in a very tight race against two other American teams, Nick and Phil being one of them, so it’s a huge win for us and our second medal. We feel like we are building on getting better every tournament and that’s what we want going into the Olympics,” said Crabb after the match. “The tournament was fantastic – what the FIVB did and what Qatar did! They kept us all safe and kept the tournament going. I could speak for every athlete out here, we’re just stoked to be back.”

“The match was a little flat for a while, but tension kind of built as it got tighter and tighter,” Gibb added. “It’s just always weird playing against the other Americans, to be honest. I love those guys. They are two of our best friends, so it’s always weird, but it was an important win for us. We’re stoked!”

ALL AVC TECHNICAL COMMITTEES TO CONDUCT ONLINE MEETINGS IN MARCH 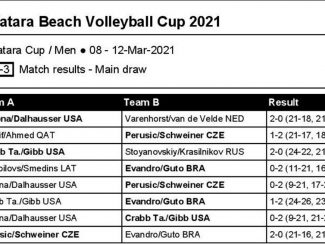 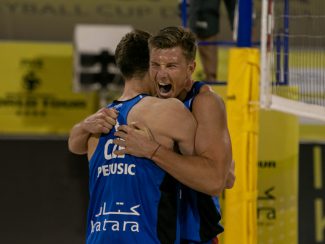