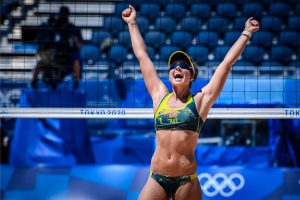 From the very start of their semifinal match against the Swiss, April and Alix showed no mercy on the court and took total control of the first set to win it by a landslide. The Americans did not let up on the gas and made sure the second set was completely one-sided as well to give them to an emphatic 2-0 (21-12, 21-11) victory. The win secured April a third Olympic medal in her career and the first ever for Alix, with the colour to be decided in the final. 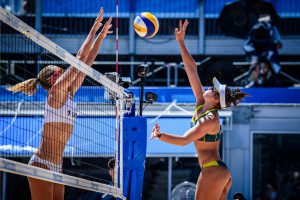 “I just can’t believe it! It’s the most amazing feeling! We dreamed of it. This is what we worked for every single day. But just because you worked for it and did everything you can doesn’t mean that it happens. So the fact that everything is falling into place feels so magical! We put in a lot of work, but so did a lot of other people and I’m just grateful,” Alix told Volleyball World. “We were expecting a battle. They have been really hot this tournament. They are a super physical and aggressive team and we wanted to impose our game on them. I think we did that from the start and I think that worked in our favour.”

“I think Alix really took over with her blocking and that was a huge key to our game plan. So she really got in their face and affected them a lot,” added April. 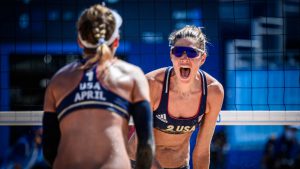 Alix and April rejoice with the semifinal victory

Artacho Del Solar and Clancy took an early lead in their match against Graudina and Kravcenoka. They were able to extend it to four points, but after 17-13, the Latvians came back on a four-point run to prompt an interesting epilogue and eventually push the set into overtime. The Australians kept their cool and managed to close it off on an ace. Graudina and Kravcenoka took their turn to control the scoreboard in the second set and widened the gap to three points at 8-5. But then, they started making far too many unforced errors and gradually lost their usual confidence on the court giving the set away for a 2-0 (23-21, 21-13) Australian victory. By making the final, Artacho Del Solar and Clancy secured the first Olympic medal of their careers. 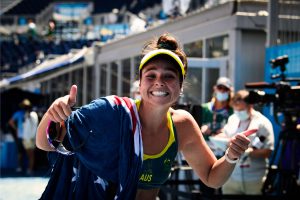 “It’s so surreal! We’ve dreamed of this moment for so many years and it’s so unreal that we are just one step away from the gold,” Artacho Del Solar told Volleyball World. “We’re just super happy right now.”

“Right now we’ll just enjoy the moment and then go back, rest and recover, and just start the process all over again,” Clancy added. “This is the moment we have dreamt of, but we’ll keep doing the same thing. The final tomorrow is just another game in the beautiful life of an athlete.” 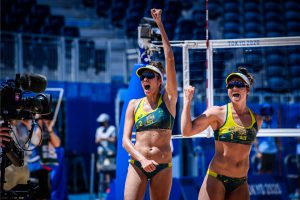 The gold medal match between USA and Australia is scheduled on Friday at 11:30 local time in Tokyo. Before that, at 10:00, Switzerland and Latvia will battle it out for the bronze. 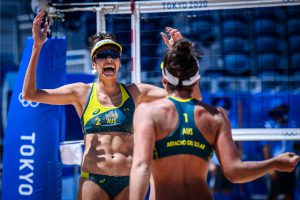 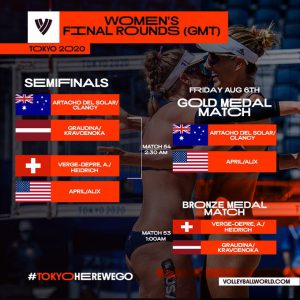