Chris McHugh and Damien Schumann will be Australia’s first male Olympic beach volleyballers since 2008, with the pair selected by the Australian Olympic Committee on Saturday.

The tournament, featuring two teams from each participating country, saw Schumann and McHugh and teammates Max Guehrer and Zach Schubert beat Indonesia in the final tie to secure a single Australian team spot for Tokyo.

The pair won Commonwealth Games on the Gold Coast in 2018 and had an undefeated 2020-2021 summer, providing the perfect base to claim the last remaining Asian volleyball quota spot in Thailand.

“Congratulations Chris and Damien, today is a fantastic reward for decades of striving towards this Olympic goal,” Chesterman said.

“It’s fantastic to have an Australian men’s beach volleyball team back at the Olympics for the first time since Beijing. For these players to have come so close on several occasions and to keep coming back hungrier than before is a testament to the character of both these players.

“I know you will represent Australia proudly both on and off the sand, and you will have millions of Australians cheering you on from back home. While they are in hotel quarantine after returning from their qualifying tournament, I know Chris and Damien will be celebrating virtually with their families, friends and teammates who have helped them reach this moment.

“Thank you to Volleyball Australia for helping young volleyballers chase their Olympic dreams and to the other squad members who also helped qualify this spot and ensure we will have a men’s and women’s team on the sand in Tokyo.”

31-year-old McHugh said being selected to represent Australia at the Tokyo Olympic Games is a humbling experience.

“I am so excited to be going to my first Olympic Games and this is a realisation of a dream which I have had since I was a child,” McHugh said.

“This Olympic cycle has been one of the most challenging periods of my life and I wouldn’t have changed it for the world. I have become a father (to Jack) and we are expecting another child in October after the Games. I’ve had a shoulder reconstruction, four knee surgeries in 10 months, won a Commonwealth Games gold medal, switched teams twice and then like everyone else having to deal with covid for the last 18 months.

“The Covid break is a period of time I would not take back as it gave me the time to spend with my young family without travel and work on my body which is now in the best shape it has been in for a very long time. Of course we haven’t been able to compete internationally whilst other countries have, but we’re confident we can surprise some teams.

“We will not only be representing ourselves but our families, support staff and of course the other members of the men’s beach volleyball team who without them we would not be in this privileged position.”

33-year-old Schumann was ecstatic to achieve a lifelong goal.
“It’s completely surreal, it’s been a lifetimes worth of work aiming for this,” Schumann said. “We have both been through so much in our lives in pursuit of this goal and to have it realised, is nothing short of a dream come true.

“This Olympic cycle has included some of the biggest highs and lows of my Volleyball career. Breaking into the top 20 teams in the world and having success at tournaments like the World Championships, Commonwealth Games, and now winning the most pressure filled Asian Qualifying tournament I have ever been a part of, has been a dream. The delay absolutely helped Chris and I come back together after playing with different partners for 18 months in the middle and give us time to work on our game.

“It’s extremely special to be the first men’s team to qualify since our coach Andrew Schacht was there in Beijing. It’s even more satisfying to know that as a country we climbed our own little Everest! I say we, because I have been so lucky to have wonderful coaches not only over the last five years, but back in Melbourne, as well as a wonderful wife and family who have supported me through so much.

“We also wouldn’t have been able to qualify without Max and Zach playing so well during the tournament as well as Paul and Tom as the reserves pushing us every day.”

Craig Marshall, Volleyball Australia National Performance Director said: “After a strong performance by our men to qualify for the Tokyo Olympic Games last week, we are looking forward to our women’s team of Taliqua Clancy and Mariafe Artacho Del Solar, and our men’s team of Chris McHugh and Damien Schumann representing Australia in Tokyo.

“They have been gearing up to put their finest out on the court for this exciting, challenging and unique Olympic Games. Our preparation has been very different for these Olympic Games compared to others due to the COVID-19 pandemic and these Games will be like no other that has come before. Our teams are ready and enthusiastic to strive for their best and I know Australia will be proud of their fighting performances in Tokyo.”

Today’s announcement takes the number of athletes selected to 414 of an expected 470 Team size. Catch all the latest team info, stats and athlete bios at www.olympics.com.au/games/tokyo-2020/team/ 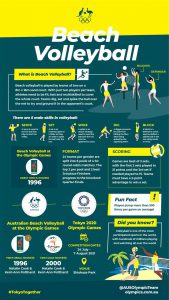