Lausanne, Switzerland, March 11, 2019 – After a weekend where an Australian women’s team and a South African men’s pair entered the international record book, the FIVB Beach Volleyball World Tour returns this week to the Middle East for the fifth annual Katara Beach Volleyball Cup in Doha.

The $150,000 Katara Beach Volleyball Cup for men begins Tuesday with qualifying, with pool play featured Wednesday to set the field for the weekend’s elimination matches where the winning team Saturday will share the $20,000 Qatar Open first-place prize.

For the fifth time since November 2014, Qatar will host an international beach volleyball tournament for men as the FIVB World Tour returns to Doha with European teams seeking to continue their gold medal dominance.

Pairs from Germany, Italy and the Netherlands have topped the previous four Doha podiums led by Dutchmen and 2018 Qatar gold medal winners Alexander Brouwer and Robert Meeuwsen, the bronze medal finishers at the Rio 2016 Olympic Games and the 2013 FIVB world champions.

In FIVB World Tour action last week, pairs from Australia, Chile and Russia topped international podiums as the men completed their 12th and 13th events on the 2018-2019 calendar with the women finishing their 12th stop this season that began at the end of last August in Hungary and concludes this September in Italy.

Nicole Laird and Becchara Palmer became the 19th women’s team to win an FIVB World Tour event after qualifying for the Main Draw as the Australians captured the gold medal on Manly Beach in Sydney.

In posting a three-set title win over Emily Day and Betsi Flint, Laird and Palmer snapped a streak of five-straight gold medal wins by an American women’s team over Australia pairs as the two countries met for the first time since July 2002 in an FIVB World Tour championship match.

The only Aussie gold medal win over the American women was in 1996 at Osaka, Japan when Sydney 2000 Olympic champions Natalie Cook and Kerri Pottharst defeated Danalee Bragado and Pat Keller in the finals.  Pottharst was in attendance Sunday serving as a commentator for VolleyFest 2019 live streaming.

In the men’s finale, the Grimalt cousins of Chile captured their second FIVB World Tour gold medal by defeating Adrian Carambula and Enrico Ross of Italy in the two-set finale. The Chileans’ first gold medal was last July in Tokyo.

Following the Katara Beach Volleyball Cup, the FIVB World Tour stages seven of its eight events in Asia starting with two more Cambodia stops March 21-24 in Siem Reap for a men’s events and April 4-7 in Battambang for a women’s tournament.

Outside of an April 18-21 event in Gothenburg, Sweden, the other FIVB World Tour men’s and women’s stops in Asia will be from April 8-11 in Satun, Thailand, April 11-14 in Langkawi, Malaysia, April 24-28 in Xiamen, China and April 30-May 4 in Kuala Lumpur, Malaysia. The last event in the Asian string is May 9-12 for a women’s stop in Tuan Chau Island, Vietnam. 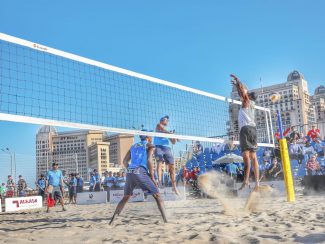 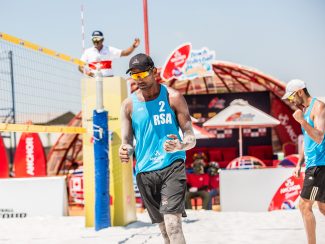