Fresh from two wins in a row the previous day, Worapeerachayakorn and Taravadee, who also picked up bronze at the recent AVC Beach Tour Roi Et Open in Roi Et, made it three for three on Thursday after seeing off Filipinas Floremel Rodriguez/Genesa Jane Eslapor 21-15, 21-15 in 30 minutes to stay atop Pool A. In their last preliminary match on Friday, the Thai duo will take on Hong Kong China’s Koo Yungyung/Au Yeung Waiyan. However, with two teams apiece from each pool advancing, Worapeerachayakorn and Taravadee look set to qualify for the quarterfinals, due to be held later in the Friday afternoon. In Pool D, Thailand’s Woranatchayakorn Phirachayakrailert./Charanrutwadee Patcharamainaruebhorn, who also captured both matches on Wednesday, flexed their muscles the following day after putting it past Kiwis Katie Sadlier/Maya Dickson 21-15, 21-16 to next take on Australians Alisha Stevens/Georgia Johnson in their last preliminary encounter on Friday. Following the straight three wins, the Thais’ chances of advancing to the quarterfinals can be within their reach. 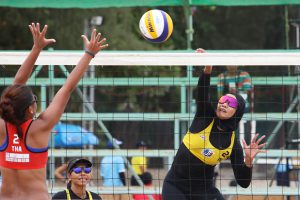 Suchinna Choemphun/Apinya Sanegpaeng became the lone Thai pairing who could not maintain their unbeaten run on Day 2 of the topflight five-day tournament. After bagging their first win on Wednesday, Suchinna/Apinya suffered a setback to go down tamely 9-21, 17-21 in a 29-minute encounter against Indonesians Dhita Juliana/Eka Yokebed in Pool C. Still, the going gets tough for the Thai duo when they will go up against Nicole Laird/Phoebe Bell on Friday. The strong Australians outplayed Chinese Taipei’s Li Yunting/Hsu Chianing 21-8, 21-6 in 21 minutes on Wednesday and pulled off a scintillating 21-14, 21-19 triumph against Indonesians Dhita/Yokebed the following day for two wins on the trot. In Pool B, Japan’s Akiko Hasegawa/Yurika Sakaguchi continued their winning streak following their 21-18, 21-12 win against Vietnamese Vu Ngoc Lan Nguyen/Neuyen Le Thi Tung Vy on Thursday. The Japanese pairing are due to next take on Filipinas Cherry Ann Rondina/Bernadeth Pons on Friday. 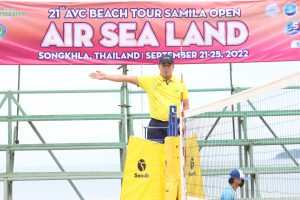 In the men’s event, three Thai pairings made their mark in the Samila Open. Pithak Tipjan/Poravid Taovato and Kitti Duangjinda/Dunwinit Kaewsai claimed their first wins in Pool G and Pool H respectively on Wednesday. Local hopefuls Surin and Banlue posted an exceptional win against Dmitriy Yakovlev/Aldash Nurdos to beat the Kazakhs 21-16, 21-13. The Thai tandem will next go up against Indonesians Andy Ardiyansah/Mohammad Ashfiya on Friday. Chinese Zhou Chaowei/Wang Yanwei, who had already enjoyed the first-day win against Filipinos Alnakran Abdilla/Jaron Requinton in Pool B, will battle it out with Australians Izac Carracher/Mark Nicolaidis to vie for the Pool winners. Carracher and Nicolaidis on Thursday spent 30 minutes in overcoming the Philippine duo 21-17, 21-14. Following two straight losses, the Filipinos crashed out of the competition. Oman’s Mazin/Hood and Ahmed/Haitham registered their first wins in respective Pool G and Pool H  on Wednesday and continued their winning ways the following day, with the former beating Malaysians Mohamad Azrul Atan/Shon Ngiap Shyang 21-10, 21-7 in 25 minutes and the latter defeating another Malaysian duo, Chia You Jing/Sim Jian Qin 22-20, 21-12. The pool plays continue on Friday morning when the tournament reaches its climax with the men’s teams giving all-out to fight for their spots in the next round of last 16 and the women’s sides contesting their electrifying quarterfinals. 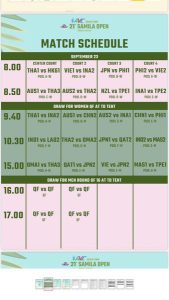 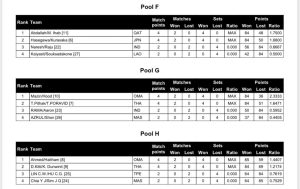 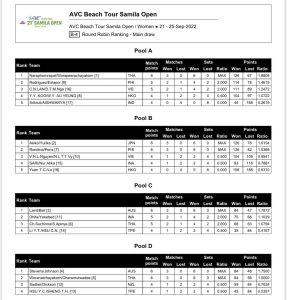 24TH AVC GENERAL ASSEMBLY HIGHLIGHTS SOLIDARITY, UNITY AND COLLABORATIONFIVB PRESIDENT MEETS WITH BOARD OF ADMINISTRATION AHEAD OF WORLD CONGRESS