Cholpon-Ata, Kyrgyzstan, August 31, 2022 – Saudi Arabia continued their unbeaten streak in the 3rd AVC Men’s Challenge Cup, as Mongolia flexed their muscles on the last day of the single round-robin preliminaries at the Sports and Recreation Complex Gazprom on Wednesday. Saudi Arabia, world No.76 and 12th place at the last year’s Asian Senior Men’s Championship in Chiba, Funabashi in Japan, remained in contention for the eventual title after making a clean sweep in the preliminaries. In the first two days, the Saudi Arabians struggled to beat Uzbekistan in hard-fought five sets and repeated the feat with an exceptional 3-0 win against Mongolia. On Wednesday, Saudi Arabia stunned hosts Kyrgyzstan in dramatic four sets. Mongolia also made their mark in this six-day tournament. After a strong start with scintillating 3-0 victory against the host side on the opening day, the Mongolians succumbed to straight-set defeat to the much stronger Saudi Arabians, but made amends for the loss by pulling off a dramatic four-set win against Uzbekistan on Wednesday. After completion of the single round-robin preliminaries on Wednesday, Saudi Arabia finished on top of the four-team standing with 8 points from three wins in succession, followed by Mongolia with 6 points from two wins against one loss. Hosts Kyrgyzstan came in third place with 3 points from one win against two losses, with lacklustre Uzbekistan lost them all to claim only one point from the 2-3 letdown to Saudi Arabia on their opening clash on August 29. All participating teams played their last preliminary matches on Wednesday, aiming to steal the show and run away with wins. 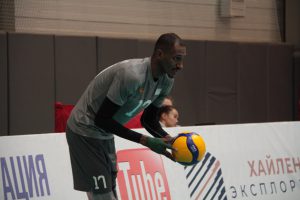 It looks like Saudi Arabia had a chance in Cholpon-Ata firmly in their pocket as they had already claimed two wins to their name. They came into the match against hosts Kyrgyzstan full of confidence and they got the job done whilst showing flashes of the brilliance that took them past rivals. 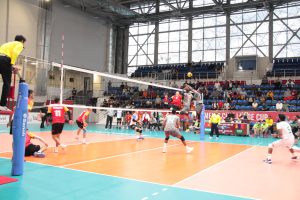 Saudi Arabia took the first set 25-20, but lost their touch in the second set when Kyrgyzstan came back much stronger and counter-attacked well to bag the second set 25-21. The host side tried to maintain their good form, but their high hopes quickly evaporated when the determined visitors, steered by Nawaf Albakheet and Ibrahim Majrashi, played incredibly well in defence to catch up, take control and break away to win the next two sets 26-24, 25-18.

Nawaf Albakheet scored a match-high 16 points from 13 attacks, one block and 2 ace serves for Saudi Arabia, while Kanybek Uulu Onolbek delivered 13 points from 11 attacks and 2 blocks for Kyrgyzstan. The Uzbek squad did not want to surrender easily as they regrouped and bounced back bravely to win the hard-fought third set 28-26. Still, their fightback was short-lived as Mongolia cruised on to win the fourth set 25-22 and match. On Thursday, September 1, is the day for rest and recovery. The competition resumes on Friday in the cross semifinals, with the best-ranked Saudi Arabia taking on the fourth-ranked Uzbekistan and the second-ranked Mongolia challenging the third-ranked Kyrgyzstan. The two winning teams on Friday will fight it out for the eventual title on Saturday, with the losers contesting the third-place playoff to vie for bronze medal.