Bangkok, Thailand, May 15, 2021 – AVC, based on the decisions of the most recent AVC Board of Administration, has recently released a competition calendar for 2021.

According to the updated calendar, Nakhon Pathom, Thailand has replaced China as hosts for the 2021 AVC Beach Volleyball Continental Cup Semi-Finals between June 18 and 19 and Finals from June 25 to 27, with eventual winners in both men’s and women’s events qualifying for the 2020 Summer Olympics in Tokyo, Japan.

The AVC Continental Cup Semi-Finals and Finals had been originally scheduled on June 18-27, 2021 in Xiamen, China, but following the serious discussions about entry policy and control measures, the organisers, in a bubble concept, cannot provide any training in the 14-day quarantine period upon teams’ arrival and thus decided to withdraw as hosts for the AVC Continental Cup.

Another traditional beach volleyball event has already been confirmed in Penghu, Chinese Taipei when the country has decided to host the 3rd AVC Beach Volleyball Tour Penghu Open in either late September or early October.

The Philippines, which hosted the Asian Senior Women’s Championship twice in 1997 and 2017, received the AVC’s green light to organise the top-tier championship for the third time later this year. Earlier, the 21st edition had been set to take place in Jiangmen, China, but for some reasons the country pulled out as hosts.

The 21st Asian Senior Women’s Volleyball Championship is due to be held in Subic and Clark, the Philippines from August 29 to September 5, 2021.

Meanwhile, Japan will host the Asian Senior Men’s Volleyball Championship for the first time in 38 years. After making its debut efforts in organising the Asian meet in 1983 in Tokyo, where the host side captured their second gold in the biennial competition, Japan has already confirmed to host the 21st edition in Chiba between September 12 and 19, 2021. 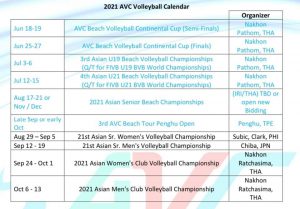