Bangkok, Thailand, February 21, 2019 – The AVC Sports Events Council Meeting at the Dusit Princess Srinakharin Hotel Bangkok was concluded on a high note on Wednesday, with the highly-anticipated Asian Olympic Qualification Tournament and an effort of creating a more challenging competition among the crucial topics being raised for creative discussion and recommendation.

AVC SEC Chairman Dr Eom Han-joo, himself one of the FIVB Sports Events Council members, chaired the two-day effective and productive meeting, which opened on Tuesday with the studying and approval of the Minutes of the 2018 AVC SEC Meeting in Bangkok.

A total of seven members including Dr Eom and Council Secretary Mr Jaksuwan Tocharoen attended the 2019 AVC SEC Meeting, while AVC Secretary-General Mr Shanrit Wongprasert, the then AVC SEC chairman, also joined some sessions of the meeting to share his experience and knowledge with the others.

Members commented and recommended the reports of the 2018 AVC Championships and various tournaments which took place in Asia.

After that, the meeting attendants were informed of the recent FIVB Sports Events Council Meeting in Lausanne, Switzerland on February 6 and 7, which focussed on a look at a number of key events scheduled to take place in the next 18 months including the 2019 VNL and the 2019 FIVB Volleyball World Cup. The 2019 VNL in particular will see the FIVB introduce Challenge Referees at every pool event. Each referee will attend an FIVB-led webinar to ensure the high standards of officiating are maintained.The Council meeting there also discussed the latest plans for each major competition including twelve Olympic volleyball qualification events which will take place in August 2019, with the winners of each intercontinental pool group joining hosts Japan in the Tokyo Games. The Olympic qualification will continue in January 2020 when five Continental Confederation events will determine the remaining places. 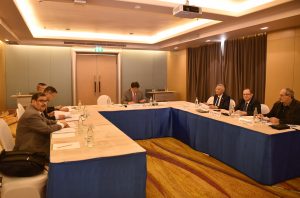 The remaining two highly-competitive competitions, the 20th Asian Senior Women’s Championship in Seoul, Korea between August 17 and 25 and the 20th Asian Senior Men’s Championship in Tehran, Iran from September 13 to 21, will serve as the qualification tournaments for the Asian Olympic Qualification Tournaments, which are due to be held from January 6 to 12, 2020, with the host countries yet to be announced.

Due to the AVC’s decision on the cancellation of the AVC Cup, Mr Shanrit purposed that a new and more challenging Asian senior tournament for both men’s and events be held in place of the cancelled competition in line with the AVC’s continued marketing policy with TV partners. 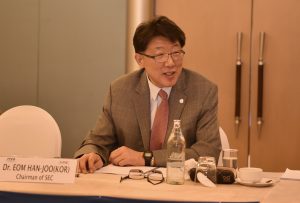 “According to the contract between AVC and our TV partners, they have planned to televise four senior tournaments live. This year, we have Asian Men’s and Women’s Club events and Asian Senior Men’s and Women’s Championships, totalling four events which will meet the compulsory request. However, next year, we will have only two Asian Club events, so we need two more senior events to make four overall. If possible, we have to conduct a feasibility study for creating a new challenging Asian senior tournament in place of the AVC Cup and we have to be in a hurry because AVC’s signing contract with our TV partners is coming near. We have to make a decision on this as early as we can,” said Mr Shanrit.

Dr Eom explained to all members that AVC decided to cancel the staging of the AVC Cup because teams always sent either their second team or club team to the competition, which led to less attention of spectators and tarnished the good image of the region’s one of the top-level competitions. Moreover, he also pointed out that the AVC will continue the staging of the less-rated AVC Challenge Cup since the tournament will allow the developing teams an opportunity to gain their experience and exposure ahead of their tougher tasks against the much stronger rivals in future major competitions.

The meeting also went through the AVC competition calendars the next couple years to make sure they will have enough time to put things in the right place and make decision on all matters concerned.

The topic on the AVC Competition Formats for 2019 was also raised for discussion and recommendations.

“We have reached an agreement and final decision to choose a proper and suitable competition format (s) for all AVC events. It is not necessary that we choose only one type of format and use it in all events. We may choose whichever format or a mixture of formats among the option that is more suitable for AVC, the host and participating teams depending on a particular situation. However, whichever it may be, it must be less cost, easy to understand and fair system for all teams and concerned parties including TV partners. Therefore, we will have several types of formats this year,  ranging from 8-team format to 16-team format, up to how many teams will take part in that event,” the AVC SEC Chairman indicated.