Around 500 student girls from Anshan Um Elmomeneen School and Jericho School participated in the festival in Jericho, a city in the Palestinian Territories located near the Jordan River in the West Bank. 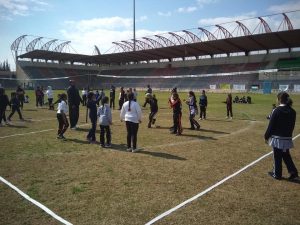 In his speech, Dr Blawneh expressed his gratitude to Jericho Municipality for hosting the festival, seeing the importance of female teachers in their efforts of developing education amongst student girls.

At the end of the one-day activity, all participating teachers and students were awarded with Certificates of Appropriation.

The FIVB recognizes Mini Volleyball as a skilled discipline and it encourages its continuous play. The game is basically volleyball for children aged 9-10 and can accommodate those aged 12-13 in the maximum cases. The rules are set by each national federation with the aim to enable matches between players of different clubs or schools.