Since January 10, we (Volleyball World) have counted down the 12 best players per gender in 2021, looking back at some of the highlights of the year including the FIVB Volleyball Nations League and the Olympic Games in Tokyo. Today we present the number one player in the women’s ranking, Korean star Kim Yeon Koung.

Who were your top players of the year? 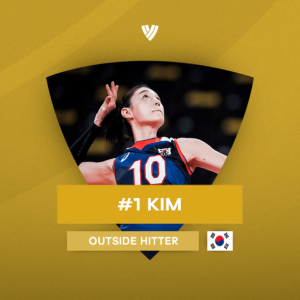 2021 was a milestone year for Kim. It was the year during which she retired from the national team, 17 seasons after she debuted for South Korea in 2005. It was the year she led her country through their third consecutive Olympic participation and to her second Olympic final four. It was the year her social media followers on both Instagram and YouTube reached the one-million mark.

Kim’s 2020-2021 club season finished in late March with a silver medal in Korea’s V-League. As the leading player of runners-up Incheon Heungkuk Life Pink Spiders, the 1.92m-tall outside hitter topped the season’s efficiency charts for both serving (0.28 aces per set) and spiking (45.92% success rate in attack) and earned the Most Valuable Player award and a spot on the Dream Team.

As the national team season started, the 33-year-old star led Korea in scoring (196 points) through their 2021 FIVB Volleyball Nations League campaign, but that was only good enough for a 15th-place finish. The result, however, proved no indicator of what was to come at the Olympic Games.

Inspired by their captain Kim’s fantastic performances, Korea did better than expected at Tokyo 2020. They finished third in their pool, behind powerful Brazil and Serbia. In a thrilling 3-2 win over hosts Japan, Kim became the first player in history to score 30+ points in a single Olympic Games match on four occasions.

With their star player contributing 28 points, Korea then went on to upset European stronghold Turkey in a nail-biting five-set quarterfinal to reach the last four of the Olympics for the second time in Kim’s career, after London 2012. She finished runner-up in the individual statistical rankings for best scorer (136 points), best attacker (122 spiking points) and best defender (83 digs). At the start of Tokyo 2020, she also led her country’s delegation as the South Korean flag bearer at the Opening Ceremony. 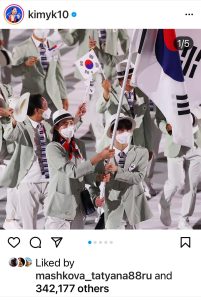 Right after the Games, Kim announced her retirement from the national team after a 17-year-long career during which she earned the status of greatest volleyball player the country has ever produced.

Ahead of the new season, Kim rejoined Chinese club Shanghai Bright Ubest. On the very last day of the calendar year, they tied their semifinal series in the Chinese national league. Four days later, they celebrated with the bronze medals.

Kim’s huge popularity among fans has made her one of the most followed volleyball players on social media. She became the first volleyballer with more than one million subscribers on YouTube. In 2021, she also attracted one million followers on Instagram. Her following on that network is now approaching 1.8 million. According to Korean sources, Kim was also the most tweeted female athlete worldwide in 2021. 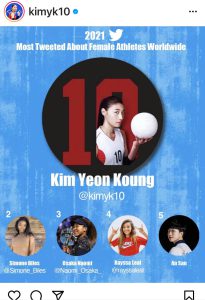