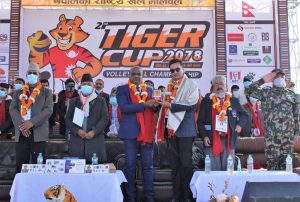 The award presentation was made on the finale of the 2nd Tiger Cup National Invitation Men’s and Women’s Volleyball Championship, which was held between January 10 and 15, 2022 in Pokhara, Nepal.

Latheef, himself Member of AVC Development and Marketing Committee who has been selected for Asia’s Outstanding Entrepreneur Award” and the “Asia’s Outstanding President Award” for the year 2020/2021 to receive the Asia Awards, powered by RULA Awards, left Nepal on Monday morning after his arrival last Thursday.

It has nearly been five years since the Government of Nepal declared volleyball as the national sport of Nepal. The decision seemed logical, geographically, because volleyball is played in all 77 districts of Nepal. It is popular among locals in every nook and cranny.

Nepal’s significant success in volleyball dated back to 2019 when their women’s team performed impressively to capture the unprecedented gold medal at the Asian Central Zone Senior Women’s Volleyball Championship in Dhaka, Bangladesh.

It was just recently that Nepal repeated their similar feat when they reigned supreme in the Asian Central Zone Women’s Volleyball Challenge Cup, which was held in Dhaka from December 22 to 28, 2021.

With Nepal Volleyball Association having all these achievements at international level and connecting with the international volleyball family, CAVA President Latheef presented the Presidents Gold Medals to the NVA President and NVA Secretary General in the grand final day of the competition.

Meanwhile, the 2nd Tiger Cup National Invitation Men’s and Women’s Volleyball Championship in Pokhara , Nepal came to a successful close on Saturday, January 15. The round-robin preliminaries took place on January 10, with only top two teams after the first round advancing to the final showdowns in both men’s and women’s events. 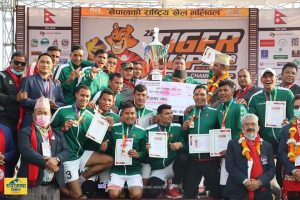 The women’s crown was won by APF Club after a 0-3 rout of Tribuvan Army Club in the final clash, with Hongwangi New Diamond Club finishing third.

Dhan Bahadur Bhatta of Tribhuvan Army Club took the Most Valuable Player Award in the men’s event, whereas national Nepalis volleyball player Sarswoti Chaudhari from APF Club was the women’s pick of the bunch.