All is set for the “PPTV” 2022 Asian “Hamrahe Avval” Senior Men’s Beach Volleyball Championship, which will be held from November 14 to 18 in Bandar Abbas, a port city and capital of Hormozgan Province on the southern coast of Iran, with Qataris Cherif Younousse/Ahmed Tijan leading star cast and Aussies Christopher McHugh/Paul Burnett back to defend their title. 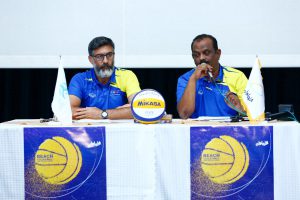 A strong field of 29 teams from 11 countries will be out to prove their talents in this championship. They comprise 4 teams from hosts Iran, 3 each from Australia, Qatar, China, Thailand, Japan and Kazakhstan, 2 apiece from Oman, Indonesia and Hong Kong China and one from India. 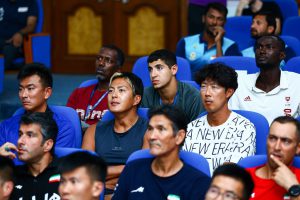 Among the big names in the continent’s topflight competition are Cherif Younousse and Ahmed Tijan, who topped the FIVB Beach Volleyball World Ranking for about nine months from August 2021 to May 2022.

In the 2021 edition in Phuket, Thailand, McHugh partnered Paul Burnett to beat Iranians Bahman Salemi/Abolhassan Khakizadeh in the final showdown to reign supreme. This time, the Australian pairing are back to defend their title and help the country stretch it to three in succession in the Asian Championship. More importantly, McHugh also teamed up with Damien Schumann to hand hosts Australia the gold medal at the 2018 Commonwealth Games on the Gold Coast.

Teammates Izaac Carracher and Mark Nicolaidis also prove to be a strong team to be reckoned with in Bandar Abbas. They sealed gold medal in the Coolangatta Futures at home and finished a well-earned 9th place at the 2022 World Championships.

Meanwhile, Chinese Ha Likejiang and Wu Jiaxin are chasing dreams of making it three in a row this month. On November 1, they claimed gold medal at the Soha Future Beach Pro Tour in Oman and last week repeated the feat following their unprecedented success in the AVC Beach Tour Bandar Abbas Open here. The Chinese duo also claimed bronze medal in the double-gender 2019 Asian Championships at home in Maoming and silver medal in the 2020 Asian Championships in Udon Thani, Thailand.

As two teams from Indonesia are ready to mount a strong challenge in Bandar Abbas, with Ade Candra Rachmawan/Mohammad Ashfiya and Ramadhan Gilang/Pribadi Danangsya picking up silver and bronze medals respectively at the 2018 Asian Games on home soil, other experienced players from Thailand, Kazakhstan, Japan, India and Hong Kong China are also expected to give it all-out in this top-tier championship in effort of bringing laurels to their countries.

Since its inception in 2000 in Yangjiang, China, the championship has been organised for 19 times. Australia ruled the roost with 5 tiles, with veteran Christopher McHugh playing a vital role in winning those all titles for the country, while Indonesia captured 4 tiles and China 3. New Zealand, Qatar and Iran won 2 each and Kazakhstan one. 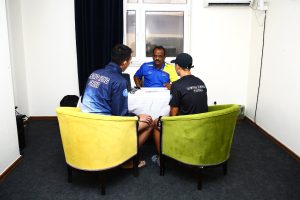 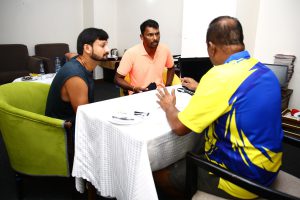 On Sunday, the Preliminary Inquiry was held at Persian Gulf Hotel in Bandar Abbas, with Technical Delegate Mr Jayaraman Srinivasan from India and Referee Delegate Mr Nader Ansari from Iran jointly conducting. Players and/or team officials attended the meeting to present their uniforms and official inquiry forms and passport/travelling document. 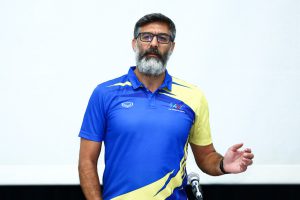 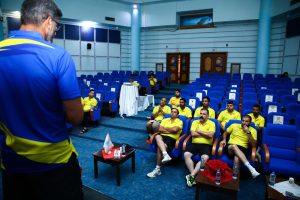 Also on the same day, Mr Ansari conducted a Referee Clinic, with all referees officiating at this championship attending to hear refereeing matters. 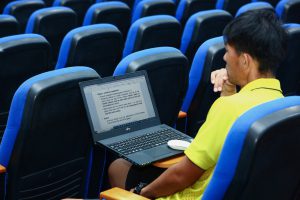 Later, the General Technical Meeting took place, with Technical Delegate Mr Jayaraman and Referee Delegate Mr Nader jointly presiding. All participating players attended the meeting to hear rules and regulations and necessary information they may need to know ahead of the official kickoff the following day. 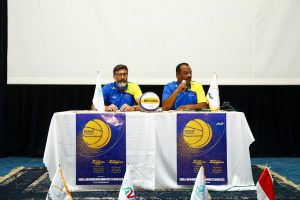 In terms of the competition format, all participating teams have been divided into 8 Pools with three teams each in Pool A, B and C and four teams apiece in Pool D, E, F, G and H. 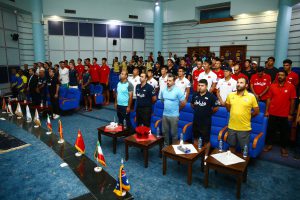 Teams will compete in pool round-robin preliminaries from November 14 to 16, while Round of 16 and Quarterfinals will be held on November 17. Semifinals and Finals (third-place playoff and championship match) will take place on November 18. 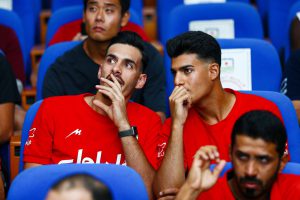 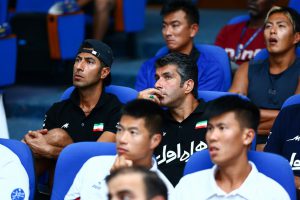 Results of drawing of lots as well as match schedule on the very first day on November 14 can be seen on the bottom of the story. 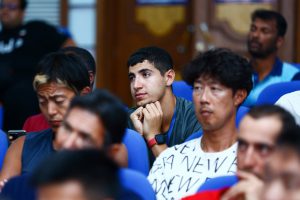 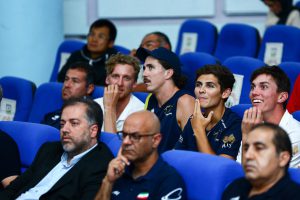 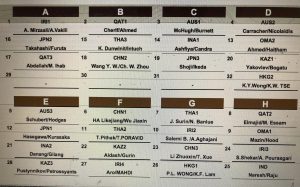 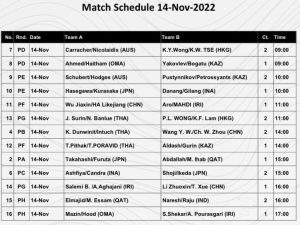 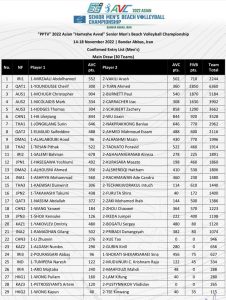