TAKAHASHI VS ISHIKAWA: EPISODE 2 OF JAPANESE CLASH COMING UP IN ITALIAN SUPERLEGA

Padova to entertain Milano on Sunday

The SuperLega Credem Banca is widely recognised as the best men’s domestic league in the world and features many of the leading players in international volleyball. These players have a huge impact on the outcome of the Italian League and this week we focus on two of the biggest Japanese national team stars – Yuki Ishikawa and Ran Takahashi – who will be up against each other when their Italian club teams lock horns in Padua on Sunday.

Takahashi’s Pallavolo Padova will entertain Ishikawa’s Allianz Milano in a seventh-leg fixture at the Kioene Arena on November 13, starting at 15:30 local time (14:30 UTC).

· Watch all SuperLega matches live or on demand on Volleyball TV.

Thanks to players like outside hitters Yuki Ishikawa and Ran Takahashi, the men’s national team of Japan is undergoing a period of revival. Japan have not medalled at a major world-level competition since their 2009 FIVB Volleyball World Grand Champions Cup bronze, but they have definitely started growing out of the underdog status they had at such competitions over the last decade, swinging in the opposite direction, towards the team’s glory years of the 1960s and the 1970s, and certainly becoming a squad to look out for. 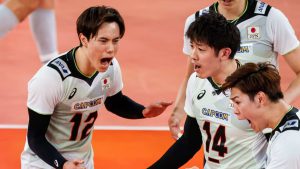 Ishikawa, the most experienced of the ‘fab three’, which also includes opposite Yuji Nishida, will turn 27 next month. The current captain of Japan has been a member of the national team since he was 18. He joined the senior team while still going through the various age-category national selections for his country and claimed his first medal, an Asian Games 2014 silver.

It was around that time when he started his first season as a professional player in Italy, becoming the first Japanese athlete to compete in the SuperLega. As a member of Modena Volley, he lifted the 2015 Coppa Italia and earned a SuperLega silver. During that season, he also returned to Japan to play for his academic team and excelled at the All-Japan Intercollegiate Championship by leading Chuo University to the title and earning the Most Valuable Player award. Ishikawa and his college teammates also won the next two editions of the competition.

The 1.91m-tall outside returned to Italy for the 2016-2017 season as a Top Volley Latina player. His club career also took him to Emma Villas Siena and Kioene Padova, before he joined Allianz Milano in 2020. With his current club, Ishikawa won the 2021 CEV Challenge Cup.

In the meantime, with the national team, Ishikawa took a 2017 gold, a 2021 silver and a 2019 bronze in the Asian Championships, as well as a 2016 bronze at the Asian Cup. He and his teammates did well at several major world-level competitions, finishing fourth at the 2019 FIVB Volleyball World Cup, fifth at the Volleyball Nations League 2022 and seventh at the Tokyo 2020 Olympic Games.

Ran Takahashi also made a solid contribution to some of those achievements after he joined Ryujin Nippon in 2021. His performance at the Tokyo Olympics in particular earned him a membership badge for the ‘fab three’ of Japanese volleyball, reconfirmed by him joining Ishikawa and Nishida in Italy in December 2021 (even if Nishida has since returned to play in Japan).

The 1.88m-tall outside, who is only 21 years old, seems to be following in Ishikawa’s footsteps. At 19, he joined the national team and immediately left a great impression. Shortly after that, while still in college and competing for the Nippon Sport Science University team, he made his way to Italy to get his professional career underway. Takahashi is now in his second season with Pallavolo Padova.

Ishikawa and Takahashi have been in plenty of action on the same side of the net as Ryujin Nippon teammates, but it will be only the second time they face each other across the net as rivals and, most likely, the first time they will both be among the six regular starters. In their first encounter as opponents, Ishikawa and his Milan teammates hammered out a 3-0 away victory over Padova in February. While Ishikawa contributed five points to that win, Takahashi played as a libero and registered 43% positive reception.

This season, however, Takahashi has been a key member of Padova’s starting line-up and has already tallied up as many as 80 points, including five blocks and three aces over five matches played, making him the team’s second most productive player. Meanwhile, Ishikawa has put away 43 points, including three aces and a block.

Ahead of their trip to Padova on Sunday, Milano are currently eighth in the standings on a 3-3 win-loss record and seven points, while Takahashi and his teammates are 10th on 3-2 and six points.