Serbia’s victory at the 2022 FIVB Volleyball Women’s World Championships wasn’t the only repeat from the 2018 edition of the tournament. Awarded as the Most Valuable Player four years ago, star opposite Tijana Boskovic did it again on Saturday after she led her national team to an undefeated campaign in the Netherlands and Poland.

The 25-year-old opposite is now just the second player to win the World Championship MVP award in multiple editions of the tournament, repeating what Cuban middle blocker Regla Torres did in 1994 and 1998.

Boskovic was one of three Serbian players selected for the tournament’s Dream Team, which also featured two members from runners-up Brazil and two more from bronze medallists Italy. 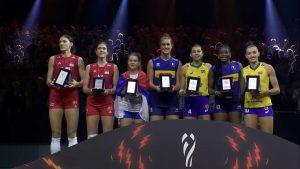 Boskovic ended the 19th edition of the World Championship ranked fourth in points scored with 216 (195 kills, 13 blocks, eight aces). Her importance for her team is highlighted by the fact that the next Serbian on the list, outside hitter Bianka Busa, had just 89 points scored across 12 matches.

“I just enjoy being on the court and I think that’s the most important thing,” she said after Serbia’s gold medal match victory against Brazil. “I just enjoy playing volleyball, that’s all.”

The Serbian star, who led all scorers in the gold medal match with 24 points, scored 20 or more points in eight of the ten matches she started, tallying an impressive 36 in the quarterfinals against Poland and following it up with 33 against the United States in the semifinals.

This is the fifth MVP award earned by Boskovic in a major national team or club tournament. Besides her two World Championship trophies, she was also selected as the best player in the 2016 FIVB Women’s Club World Championship and the 2017 and 2019 editions of the European Championship.