Nanjing, China, July 6, 2019 – Brazil had an overwhelming straight-set (25-23, 25-15, 25-10) win against last year’s runners’ up Turkey in the semifinals of the 2019 FIVB Volleyball Nations League on Saturday. After losing both of their encounters with Turkey at the VNL, the South American squad finally put a stop to their winless run with an upward trending performance and reach the finale for the first time.

Natalia Pereira’s attack rampage led the way for the Brazilians to snatch the win in tight contest in the opening set. In the next two frames, Brazil’s performance got better and better, while their opponents gave away many points as they suffered from many unforced errors.

Natalia topped all scorers with 15 points, then the rest of the starting unit contributed to the onslaught. Lorenne Geraldo Teixeira and Mara Ferreira Leao scored nine and eight points, respectively, while Gabi Guimaraes and Ana Beatriz Correa had seven points apiece. The Brazilians contained the Turkish spikers, including Ebrar Karakurt, who only managed to record 10 markers.

Head-to-Head
• Turkey and Brazil will meet for the 12th time in major world level competitions. Brazil won eight of the previous 11 encounters (W8-L3).
• Turkey have won their last two world level encounters with Brazil, both in the FIVB Volleyball Nations League. Turkey won 3-0 in last year’s semi-finals and 3-2 in this year’s preliminary round.
• Despite Brazil’s defeat in last year’s semi-finals, Tandara Caixeta scored a match-high 20 points. Meryem Boz and Hande Baladin (both 14) won the most points for Turkey.
• In their 2019 VNL meeting, a Brazilian won the most points again: Gabriela Braga Guimaraes (21). Meliha Ismailoglu (17) scored the most points for Turkey.
• Brazil’s last world level victory over Turkey came in the 2018 VNL, a 3-1 in the preliminary round in 2018.

Turkey
• Turkey have reached the FIVB Volleyball Nations League semi-finals for the second year in a row. They defeated China (3-1) and Italy (3-0) in this year’s final round.
• Last year, Turkey reached the final after a straight-sets win against Brazil in the semi-finals. They lost the final 3-2 to United States.
• Turkey’s runners-up finish in the 2018 VNL is the country’s best result in a major world level competition. Turkey achieved its only other world level podium in the 2012 World Grand Prix (3rd).
• Ebrar Karakurt (250) is the fourth-best scorer in the 2019 VNL.
• Zehra Gunes (25) and Karakurt (23) have both scored more than 20 aces in the 2019 VNL.
• Kubra Caliskan won nine points from stuff blocks in this year’s final round. In 2018, Gunes and Brazil’s Adenizia Da Silva reached a joint-high 13 points from blocks in the final round.

Brazil
• Brazil are in the FIVB Volleyball Nations League semi-finals for the second successive year. They won 3-2 against Poland before losing 3-1 to United States in this year’s final round.
• Last year, Brazil failed to reach the final after a straight-sets defeat against Turkey in the semi-finals. They lost the third-place decider 3-0 to China.
• Brazil have already won Olympic gold (2 times), the World Grand Prix (12 times) and the Grand Champions Cup (2 times).
• Brazil could lose successive VNL matches for the second time, after the aforementioned defeats in last year’s semi-finals and the third-place decider.
• Gabriela Braga Guimaraes (251) is the third-best scorer in the 2019 VNL, after Poland’s Malwina Smarzek (421) and Dominican Republic’s Brayelin Elizabeth Martinez (258).
• Braga Guimaraes is among the best attackers (46.01%) and receivers (30.59%) in the 2019 VNL.
• Ana Beatriz Correa has won 46 points from blocks in the 2019 VNL, one shy of the current leader Maja Aleksic (47 for Serbia). 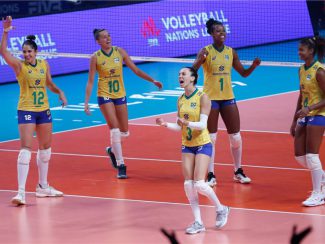