BUDDING STARS CONVERGE ON TEHRAN TO FIGHT FOR WORLD TITLE

Italy celebrate their 2019 FIVB Boys’ U19 World Championship title in Tunis and return this week to Tehran to defend it.

Eighteen teams from across the globe are lined up to begin showcasing the new generation of volleyball stars as the 2021 FIVB Boys’ U19 World Championship gets underway Tuesday in Tehran.

The Boys’ U19 World Championship returns to the Iranian capital for the second time in the history of the biennial competition which was established in 1989 and is now in its 17th edition. 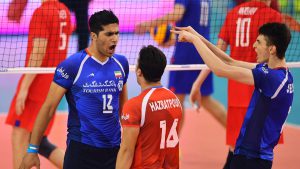 The most successful team of all in the history of the competition are Brazil, with six gold medals to their name. They have not won a title since 2003, but are here in Tehran to try and rectify this.

And Russia remain an enigma – the current generation having skipped the last European Championship due to coronavirus lockdown problems – but are now ready to make their first appearance before an international audience, after twice on the trot losing the finals of the 2017 and 2019 editions.

A total of 20 teams had been entered to take part in this year’s competition as usual, but late withdrawals by the Dominican Republic and Guatemala due to coronavirus cases have reduced the field to 18 sides.

The withdrawn teams forfeit all their matches and will be ranked joint 19th.

This leaves the tournament with two pools of four and two pools of five teams. The top two teams from each pool advance to the knockout stage (though everybody remains to battle it out for all positions), starting with the quarterfinals and winding down to the medals matches of Thursday 2 September.

The Boys’ U19 World Championship is traditionally the first point of entry into the international world of volleyball for budding stars who develop huge careers and eventually leave striking impact on the sport.

Just consider some of the volleyball legends who have earned their first MVP awards in the history of the competition:
Nalbert Bitencourt and Gilberto ‘Giba’ de Godoy of Brazil, Aleksandar Atanasijevic and Uros Kovacevic of Serbia, Pavel Pankov of Russia and Bartosz Kwolek of Poland – to name just a few.

Luca Vettori of Italy, Argentina’s Sebastian Sole and Iran’s Mohammad Mousavi are some more players who have taken their first steps towards future stardom at the U19 World Championships. 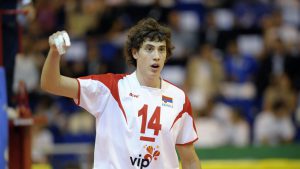 A young Aleksandar Atanasijevic of Serbia at the 2009 Boys’ U19 World Championship, as he took his first steps towards future stardom.

What this year’s edition has in store will show in the coming days, but the eyes of volleyball fans across the world are focused on Tehran for the next nine days, eagerly trying to get a glimpse into the future of the sport.

Due to coronavirus restrictions, with strict hygiene protocols in place, the 2021 Boys’ U19 World Championship will be held without spectators in the two competition courts at Tehran’s Azadi Sports Complex – but all matches will be streamed live on the Volleyball World YouTube Channel.  https://www.youtube.com/c/volleyballworld/featured