BUDDING VOLLEYBALL STARS IN GLOBAL DEBUT AT GIRLS’ U18 WORLDS

Ismailia, Egypt, September 4, 2019 – The world gets a first insight into the new generation of volleyball players over the next couple of weeks, as the 2019 FIVB Girls’ U18 World Championship gets underway tomorrow (Thursday) in two Egyptian locations, Ismailia and Cairo, with 20 teams from across the globe showcasing their budding stars that will shine in the years ahead.

Italy go for a third straight Girls U18 World Championship title over the next couple of weeks here in Egypt, hoping to repeat the triumphs of 2015 and 2017, as the competition comes to Africa for the first time in its history, after two editions in South America.

Led by MVPs Paola Egonu in 2015 when they destroyed USA 3-0 in the final in Lima and Elena Pietrini in 2017 when they outplayed the Dominican Republic 3-1 in the final in Rosario, Italy look at becoming the first country to bag three successive gold medals.

China lead the all-time medals list with four gold, one silver and one bronze, but they have never done three in a row. Their last gold dates from 2013.

But Brazil are also here to regain former glory. The three-time world champion (1997, 2005, 2009) are looking for a return to the podium after poor finishes of 11th and 10th in the previous two editions.

And eyes will also be on hosts Egypt, as they showcase their visionary project of developing female volleyball in the country as they begin dreaming of the Paris 2024 Olympic Games.

The 2019 Girls’ U18 World Championship features 20 teams representing, divided into four pools of five each for the first phase.

This pool stage of the competition takes place over the first five days of the tournament, followed by four days of knockout and classification matches, culminating with the medals matches on the evening of 14 September in Ismailia. 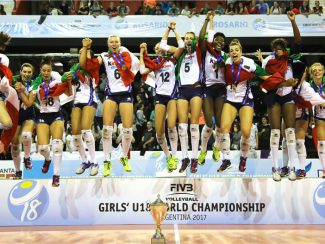