The exceptional 21-16, 21-17 win in the Friday’s showdown not only handed the in-form Qataris the Asian title for the third time in history, but was also a sweet revenge for their disappointing 16-21, 19-21 loss in the semifinal clash at the previous double-gender edition in Phuket, Thailand last year. 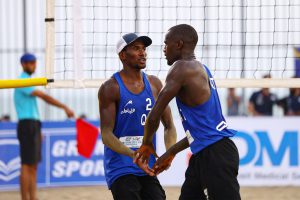 The victory stretched Qatar’s dominance in the annual competition to 3 times. Nonetheless, Australia stayed atop the medal standing of the Asian Senior Men’s Championship with 5 gold, while Indonesia had 4 and China collected 3. New Zealand and Iran had won 2 apiece and Kazakhstan claimed one. Cherif and Ahmed, who captured their first two Asian titles in 2018 in Satun, Thailand and 2019 in Maoming, China, lived up to their top billing as current world No.4 to win the 2022 Volleyball World Beach Pro Tour Challenge event in Maldives last month. However, the Qataris went through tough times in Bandar Abbas, facing strong Australians in three matches of the final phase in the star-studded Asian Championship. After their unbeaten streak in the pool play, Cherif and Ahmed came back to beat Australians Izac Carracher/Mark Nicolaidis 2-1 in the action-packed round of 16 in the Thursday morning and continued their remarkable run to put it past fighting another Australian pairing, Zachery Schubert/Thomas Hodges, 2-1 in the quarterfinals later in the afternoon. However, the semifinal and final encounters proved to be more comfortable outings for Cherif and Ahmed as the Qatari duo turned things around to power past Chinese Li Zhuoxin/Xue Tao 21-18, 21-14 in the semifinal clash and Aussies McHugh/Burnett 21-16, 21-17 in the showdown later in the afternoon. Meanwhile, the shock loss on Friday smashed McHugh’s dreams of winning his sixth Asian title as the Australian vetran, 33, had already claimed it in 2012, 2014 and 2016 with previous partner Isaac Kapa, 2020 with Damien Schumann and 2021 with Paul Burnett. McHugh also performed brilliantly to capture back-to-back Commonwealth Games titles, winning the 2018 edition on the Gold Coast with partner Damien Schumann and the 2022 Birmingham episode with current partner Burnett.

McHugh and Burnett got the top-tier championship off to a disappointing start following their stunning 0-2 loss to Japanese Shoji Kensuke and Ikeda Jumpei in their first Pool C match, but after that the Australian sensation stole the show to cruise past their respective opponents with all comfortable victories.

On Thursday, McHugh and Burnett had a remarkable run to demolish Qataris Abdallah Nassim/Mohamed Ihab Zaki 21-18, 21-13 in the round of last 16 and later outplay Kazakhstan’s Vladislav Pustynnikov/Artem Petrossyants 21-14, 21-10 in the quarterfinals. However, McHugh and Burnett faced the daunting outings on Friday. In the semifinal encounter against Abdolhamed Mirzaali/Arash Vakili earlier, the Australian tandem recovered from the first-set down to put it past the Iranian top seeds 16-21, 21-18, 15-11 in gruelling 50 minutes but found Qataris Cherif/Ahmed too strong in the final showdown to go down in straight sets. Dr Mohammad Reza Davarzani, President of Islamic Republic of Iran Volleyball Federation, presided over the awards presentation and the closing ceremony shortly after the completion of the final showdown. IRIVF Secretary General Mr Milad Taghavi and other officials also attended the ceremony.