Reigning world champions Viacheslav Krasilnikov and Oleg Stoyanovskiy of ROC progressed to the semifinals of the Tokyo 2020 men’s Olympic beach volleyball tournament after a straight-set victory over Germany’s Julius Thole and Clemens Wickler. Cherif Younousse and Ahmed Tijan will be their next opponents in the battle for a spot in Saturday’s final. The Qataris outplayed Italy’s Paolo Nicolai and Daniele Lupo in Wednesday’s last quarterfinal at Shiokaze Park. 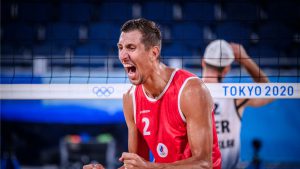 The two sets of the quarterfinal between Krasilnikov/Stoyanovskiy and Thole/Wickler unfolded following similar patterns. The Germans had a slight early lead; then the world champs stepped in front. Thole and Wickler kept the fire burning, but were only able to catch up occasionally without regaining control through the ends of the sets. At first match point, Stoyanovskiy delivered the winner in an extraordinary manner. In an attempt to block, he practically set the ball for himself and then hammered it into the opponents’ side to celebrate with a 2-0 (21-16, 21-19) victory.

“It was a tough match. We know this team really well. We always play hard with them, because they are really strong. We’ve already played them five times and it was in the final stages of tournaments. We know how to play them and how they play against us,” Stoyanovskiy told Volleyball World. “We are just very happy that we won. For sure, we are improving from game to game. We did not give away a set. And that already is a good thing.” 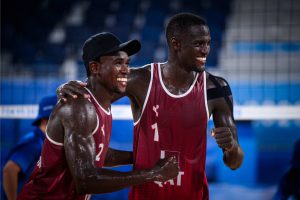 Nicolai and Lupo could not hold on to the three-point lead they opened early into their match with Cherif and Ahmed. After 8-8, the Qatari team took control of the scoreboard and never let go through the end of the first set. The second set was far more competitive and the Italians even pushed it to overtime. They denied two Qatari match points, but on the third one Cherif killed to stop the clocks at 2-0 (21-17, 23-21).

“I’m grateful to be in the semifinal, because it took us maybe six or seven years to build this team. It’s a long process. But we trust the process. For sure, the road is going to be very difficult; there will be some ups and downs. But we didn’t give up and we’re thankful to be here,” said Cherif. “It was a very tough game mentally. They were playing really well and not giving up. Now we’ll get a good rest, because tomorrow we are going to be here again.” 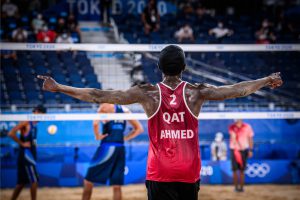