At the start of the 2021 beach volleyball season, Cherif Younousse and Ahmed Tijan were not far above the cut-off line in the provisional Olympic ranking and their qualification for Tokyo 2020 was far from certain. At the time, hardly anyone could expect the kind of season the Qatari pair were about to have.

And it has been a fantastic season so far. They started the year with their first gold on the FIVB Beach Volleyball World Tour as a team. Yes, it was at a 1-star tournament and they were playing at home in Doha, but it was still gold. Then they didn’t do as well as expected at the 4-star Doha event, but still made the quarterfinals.

However, at five of the next six 4-star tournaments, Cherif and Ahmed made the final, celebrating with the gold medals at the third Cancun event. This incredible run quickly brought them up to the number one spot in the FIVB World Ranking at the start of the Olympic Games in Tokyo.

“It was hard work, patience and discipline. We knew that we had the potential. What we were focused on was how to express those feelings, how to play better year by year. So every year we were trying to evaluate the mistakes we made in the last year. I think so far we are doing great,” Cherif told Volleyball World.

“It was not an easy process. It’s a long process. It didn’t start now. It started in 2012. Mentally and physically, it was not easy. It took us maybe six or seven years to build this team. But we trust the process. For sure, the road is going to be very difficult; there will be some ups and downs. But we didn’t give up and we’re thankful to be here.” 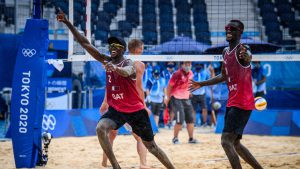 By ‘here’ Cherif meant the Olympic podium at Tokyo 2020. The Qatari pair finished with the bronze, their country’s first ever Olympic medal in beach volleyball.

“We had a great feeling that we were going to get something, because before the event we were announced as number one in the World Ranking,” continued the 26-year-old blocker. “That also pushed us to play. Unluckily, we couldn’t reach the final, losing to the world champions. I think it was a good rival to lose to. Right now, it’s a really great feeling for the people of Qatar. They are really proud of us and that was the goal. Now it’s a dream come true and we are grateful. 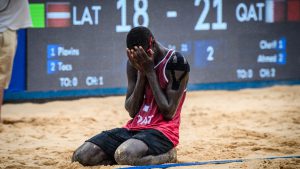 Cherif kneels on the sand after winning the Olympic bronze

Three years ago, in an interview for fivb.com, Cherif said, “One day we are going to be Olympic champions or world champions, for sure!” At the time it may have sounded a little far-fetched, but indeed, heading into Tokyo 2020, they were among the favourites for the Olympic title. They took “only” the bronze, but the FIVB World Championship is only a year away. Is this when they are going to keep their promise?

“Yes,” said Cherif. “We’ve been talking about this in the gym. What would it be like if one day we are world champs or Olympic champs? And our coach said, ‘You, guys, have it!’ We just took it and believed in it. Now we made the next step, but this is over and now we have to get ready for the World Championship next year and the Olympics in Paris. 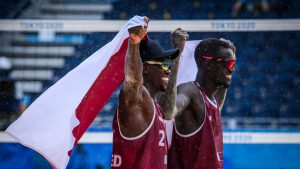 Cherif and Ahmed carry the national flag of Qatar

Cherif had his beach volleyball idols in the past. He thinks that maybe now it’s his time to be a role model for the younger generation, which will come to replace him in the future.

“My idol, Alison, was out early into the tournament. He was my favourite player, he and Phil. They were both out. But this is sports. There are young teams and the game is really growing,” said Cherif. “I will also pass through that. There will be another generation and they will put me out at one of the Olympics. You never know. Maybe the guy who is looking up to me now is watching me and maybe in the next 10 years he is going to beat me. I was watching London 2012 on TV and four years later I was there in Rio.

“It was all the hard work, waking up at seven o’clock, going to the gym when everybody is sleeping and sacrificing a lot of things, having some ups and downs through the process. But we believed in that; we didn’t just give up. We kept pushing, our staff, my partner and I. Our federation always supported us, even when we lost and finished ninth or 17th. All our families are proud of us, because they know how much hard work we put in and how we sacrificed everything. This year I became a father. Now my son is 11 months old and I spent only four months with him and now he is a big boy. Leaving them was a sacrifice I made and it’s always on my mind. But it was worth it.” 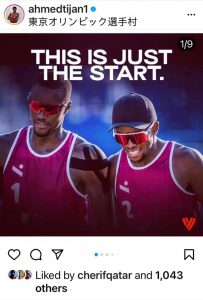