Chinese coach Li Huan Ning has completed his 14-day quarantine and has just started working with the team, but he already knows the weight of expectation on him.

“I know Vietnamese volleyball has not been on top of the SEA Games ever. I am here to make the dream come true,” Li told reporters through an interpreter.

“I am really confident and will inspire my players to reach our target. We will look at Park Hang-seo and his football players to try hard and complete our mission.”

Eighteen national team players have been training since early this month in Ha Noi.

“The players are doing a good job although they have to do tough and heavy exercises. However, they still need to work harder to sharpen their skills and fix their weaknesses.

“They know that to get a sweet result like the footballers we need to work as a united team and strictly follow coaches’ practising methods,” said Li.

Due to the COVID-19 pandemic, the national team will have to do without international competition, but Li has planned an intensive training camp in China.

“If both Viet Nam and China well manage the pandemic, we will send the team to Shanghai, my home, to practice and compete with local clubs. It would be the most feasible plan at the moment,” said Li.

The national team will train until March 4. The players will then return to their clubs for the national championship on March 17-28 before joining the next camp in the capital city.
Viet Nam have consistently finished in the top three of the SEA Games, but the 2019 edition saw a humiliating failure as the team were disqualified from the group stages.

They lost all three matches and were defeated by Cambodia, who had never beaten Việt Nam in the past.
The unacceptable loss was the straw for local administrators, who decided to offer a high salary to hire the 56-year-old Li.

“After consideration, we chose Li with a hope that his coaching method would be suitable for Vietnamese players and bring out a good result,” said Volleyball Federation of Vietnam General Secretary Le Tro Truong.

He coached Indonesian club Petrokimia Gresik from 2016 to 2017. 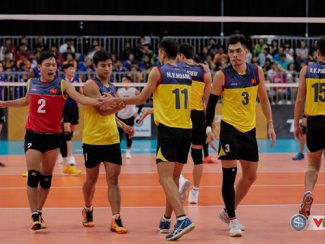