After reviewing the action at this year’s Chinese Men’s Volleyball Championship, which recently concluded, Wu targeted qualification for the Paris 2024 Olympic Games and said: “Our players worked hard in every game and showed their strength. Firstly, the players must learn the spirit of the Chinese women’s volleyball team.

“The Chinese women’s team are remarkably tenacious, with a never-say-die spirit that is worth learning and emulating,” he said.

The 53-year-old is clear about where his team’s weakness lies, saying: “We should focus more on building up our physical strength and endurance.

“Then the team will focus on training basic skills and techniques, and promote greater teamwork.

“Experienced players will mainly focus on increasing their physical capacity and the younger players will build up their basics. I’m looking forward to seeing more players with potential stand out,” added Wu, who coached Zhejiang’s provincial women’s team for seven years, winning one national title.

Wu hopes his squad can contend for gold at the 2022 Asian Games in Hangzhou, but said the “major goal” was to qualify for the 2024 Paris Olympics. 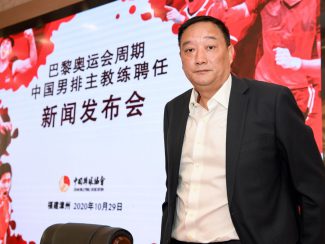