Local favourites Mariafe Artacho del Solar and Taliqua Clancy are seeded first in the women’s draw having won gold at the Chetumal 4-Star in November.

Triple Olympic champion Kerri Walsh Jennings and Brooke Sweat are third seeds. Their most recent podium finish came at the Qinzhou 3-Star in November where they won silver.

USA’s Phil Dalhausser and Nick Lucena top the men’s seedings, while Chilean cousins Marco and Esteban Grimalt are seeded fourth a year on from winning the World Tour event in Sydney.

Coolangatta Beach lies at the southern tip of the Gold Coast and 105 kilometres from Brisbane. The tournament will be the third 3-Star World Tour event on the 2019-20 calendar.

In 2018, Gold Coast provided a spectacular setting for beach volleyball when it made its Commonwealth Games debut. A 5,000-capacity stadium was built and was filled throughout the tournament.

The current World Tour season runs from October 2019 to August 2020, while the Tokyo 2020 Olympic Games beach volleyball tournament will feature 24 teams per gender in competition from Saturday July 25 to Saturday August 8. The World Tour visits Guam this week before moving to Doha in Qatar for the first 4-star event of 2020.

BIRTHDAY GIRL KIM ON HER WAY BACK 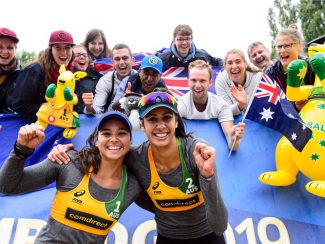