CLANCY AND MARIAFE HOPING TO EXTEND PODIUM STREAK IN DOHA

After collecting medals at their last five international events, the Australians aim for a strong performance at the Beach Pro Tour Finals

Winning international beach volleyball medals has never been a problem for Taliqua Clancy and Mariafe Artacho. The Australians, who are partners since the end of 2017, have taken a place on the podium at 20 of the 39 tournaments they have played at together, including the 2020 Tokyo Olympics.

The Australians will be looking for another big result at the end of the month, when they will be one of the ten women’s teams competing at the Volleyball World Beach Pro Tour Finals in Doha, Qatar from January 26-29.

“I believe it’s going to be a great event,” Mariafe told Volleyball World. “We’ll have the top ten teams in the world there, so the standards are going to be really high. We’re excited to be a part of it, we played in the 2018 World Tour Finals and it was a great experience. The fact that there are no points in play takes some of the pressure off and makes it very fun, but at the same time everyone will be looking to get that big check.”

Unlike 2018, when they headed to Hamburg after three consecutive ninth-place finishes on the World Tour, Clancy and Mariafe will make the trip to Doha on the back of a very strong run, including a place on the podium at their last five international events.

Since July, the Olympic silver medallists have won gold at the Beach Pro Tour Espinho Challenge, bronze at Elite16 events in Gstaad and Torquay and silver at the Commonwealth Games and the Asian Championship.

The five-tournament podium streak is the longest ever achieved by the two players, but also a good summary of what has been a productive season. In 2022, Clancy and Mariafe were in the top five at nine of the ten events they played at, making it to the semifinals in seven of them and winning medals in six.

“We had a really good year,” Mariafe reflected. “It was a good start for us and has put us in a really good spot for the Olympic qualification period. Our aim is always to be consistent during the season. We don’t want to be that team that just wins that random medal here and there. That’s what we are about and we’re looking forward to building from it in 2023.”

The Finals are expected to offer a big challenge to each of the ten teams competing, and will be incredibly competitive right from the start.

“It’s a smaller draw with only the top teams, so it’s going to be very competitive,” said Mariafe. “Every match will be a great one and I think that what changes is that we need to start strong – but that was the same with the Elite16 events. We don’t really change the way we go into it. We have the same processes and the same preparation and we just focus on what we’re doing on our side of the net.” 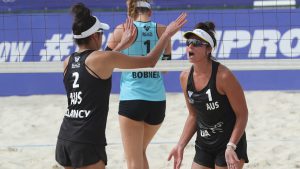 Despite their success on the international tour, Clancy and Mariafe are yet to win a medal in Doha, the host city of the Beach Pro Tour Finals. The Australians have played in the Qatari capital just once, in May 2022, and finished the Challenge event ranked fourth.

“It was my first time in Qatar and everyone was so welcoming,” Mariafe reacted. “We had a great time and I’m looking forward to getting back there and playing in the Finals. Can’t wait to get into it.”