DRAWING OF LOTS FOR 2022 AVC CUP FOR MEN UNVEILED

Bangkok, Thailand, June 23, 2022 – AVC on Thursday released results of drawing of lots for the 2022 AVC Cup for Men from August 7 to 14 in Nakhon Pathom, Thailand, with 12 strong teams testing their mettle to vie for top honour.

Actually, the 2022 AVC Cup for Men, an international volleyball competition in Asia contested by AVC’s top ten senior men’s national teams, is due to take place in Chinese Taipei, but because of the strict COVID-19 protocols, the country, which had already hosted the 2018 edition, could not play host to this topflight championship this time.

On Thursday, AVC confirmed that Thailand will be the new host nation of this championship and Thailand Volleyball Association will send official invitation letter to participating teams by the beginning of July in order to keep them updated on the COVID-19 hygiene protocols with the Thai Government.

According to the results of drawing of lots, hosts Thailand, Korea and Hong Kong, China are in Pool A, while Iran, Pakistan and Kazakhstan are in Pool B. Pool C comprises Japan, Australia and India, with Chinese Taipei, Qatar and Bahrain in Pool D.

On the opening day on August 7, Chinese Taipei and Bahrain set up the curtain-raiser, while India challenge Japan, hosts Thailand take on Hong Kong, China and Iran meet Kazakhstan.

After that, top two teams from Pool E and Pool F will secure semifinal berths, while teams finishing third and fourth places from both pools after the playoffs will contest the 5th-8th playoffs.

As the playoffs encounters on August 11-12 and semifinals on August 13  will take place at the same competition site at Nakhon Pathom Sports Centre Gymnasium, teams finishing third from each pool will be relegated to classification round for 9th-12th places to be held at second hall T.R. Ratanakosin.

The AVC Cup for Men was first held in Nakhon Ratchasima, Thailand in 2008 and Iran, Korea and China performed well to finish on top-three podium. The 2018 edition took place in Taipei, Chinese Taipei, where Qatar stunned title-holders Iran 3-2 in the final showdown for their unprecedented title, and the 2020 edition was initially scheduled to take place in Nay Pyi Taw, Myanmar, but was eventually cancelled due to grave concerns over the COVID-19 pandemic. 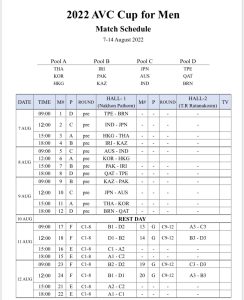 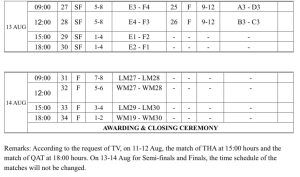