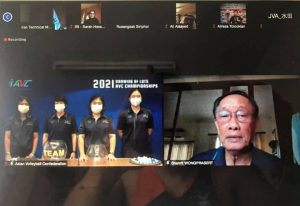 Assisting Shanrit in the drawing of lots on Friday were Nattalida Sumdangdech, Pattana Kittichaisombat, Phenyada Fuengtharnthip and Mingkwan Pusiddusid, all of them staff at the AVC Headquarters. After that, Kiattipong delivered a welcome speech to all participants. “On behalf of AVC President Mrs Rita Subowo, I would like to welcome all of you to the drawing of lots ceremony for the 21st Asian Senior Men’s and Women’s Volleyball Championships in Japan and the Philippines respectively. 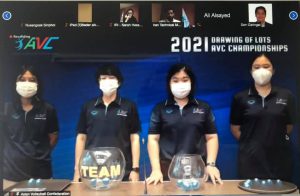 AVC staff assist in the drawing of lots

“The Championships will be the AVC’s first two indoor competitions to be held after Asia has been severely hit by the COVID-19 pandemic. Special thanks go to hosts Philippines and Japan for their kind supports to help AVC run its activities during these difficult times of the outbreak. The two Championships will serve as the qualification tournaments for the 2022 FIVB Women’s World Championship in the Netherlands and Poland. I wish both host nations great success in staging the two Championships and the very best of luck to all participating teams,” he added.

Dr Eom also expressed his sincere thanks to the Philippines and Japan for their supports, pinning his high hopes on both nations to successfully host those two top-flight competitions. 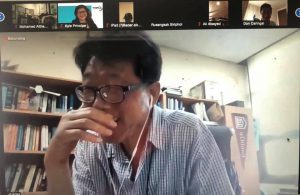 Shanrit said that beyond the health and human tragedy of the coronavirus, it is now widely recognised that the COVID-19 pandemic has hugely impacted the AVC, particularly in running its activities through these difficult situations. Without organising competitions, AVC cannot receive income to run its activities.

“AVC has tried hard to bring back activities in order that we can boost our marketing strategy to catch up with other Confederations including NORCECA and CEV, which have held many major competitions. Therefore, I would like to thank the Philippines and Japan for excellent supports in organising the AVC Championships,” he said. 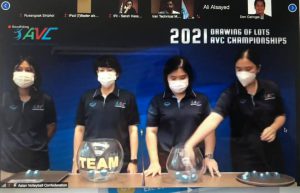 Shanrit informed all participants that he felt regret for learning that many teams have withdrawn from the Asian Senior Women’s Championship in the Philippines, citing that China cannot participate because the Championship and the National Games of China are held at the same time.

“Initially, 12 entries have been submitted for the Asian Senior Women’s Championship in the Philippines, but a few teams have withdrawn from the tournament following the grave concerns over the global COVID-19 pandemic, while strict travel restrictions for arrival passengers to the Philippines resulted in unavailability for Nepal and India to participate in the Championship,” he said.

“Regarding the Asian Senior Men’s Championship, Sri Lanka beat Uzbekistan in the Central Asian Zonal Pre-Qualification Match on July 14 to secure their place in the Championship in Japan.”

Shanrit, himself AVC Honorary Life Vice President, explained that seedings of participating teams for both Championships have been based solely on their rankings from the previous edition and placed per the serpentine principle. 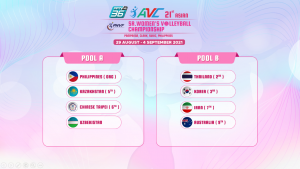 The 21st Asian Senior Women’s Volleyball Championship will be held in Pampanga, Clark, Subic, the Philippines from August 29 to September 4, 2021, with 8 teams vying for top honours. According to the draw results, hosts Philippines are in Pool A with Kazakhstan, Chinese Taipei and Uzbekistan. Pool B comprises Thailand, consecutive two-time Asian silver medallists, Korea, Iran and Australia. 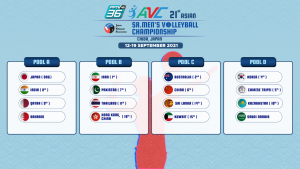 The 21st Asian Senior Men’s Volleyball Championship is due to take place in Chiba, Japan between September 12 and 19, 2021. Hosts Japan are in Pool A with India, Qatar and Bahrain, while reigning champions Iran, Pakistan, Thailand and Hong Kong China are in Pool B. Pool C consists of Australia, silver medallists at the previous edition, China, Sri Lanka and Kuwait, with Korea, Chinese Taipei, Kazakhstan and Saudi Arabia in Pool D.

Shanrit said that after consultation with host nations Philippines and Japan and Host TV Broadcasters for further consideration and decision on drawing of lots results and competition programs, AVC will circulate match schedules to all participating teams within 10 days.