Lausanne, Switzerland, March 26, 2019 – The inaugural FIVB Snow Volleyball World Tour is just around the corner and we have been speaking to one of the pioneers of snow volleyball, IOC Member and President of the Austrian Olympic Committee Mr Karl Stoss.

Mr Stoss has been Austrian NOC President since 2009 and was integral in the staging of Snow Volleyball Night at the PyeongChang 2018 Olympic Winter Games co-organised by the FIVB and CEV. Austria has been a regular host for snow volleyball events, including CEV European Tour events and the first CEV Snow Volleyball European Championship last year.

Austria is going to host the first leg of the FIVB Snow Volleyball World Tour. What is it about snow volleyball that you and the Austrian people love?

We held the first snow volleyball event in 2008, with just four players competing. At the first edition of the CEV European Championship at Wagrain-Kleinarl last year we had 24 teams from 18 countries competing. It shows you how much this sport has grown!

The atmosphere at an altitude of 1,850m, on beautiful snow-covered mountains with incredible scenery all around, is tremendous. It is fun to watch and easy to play, even at such an altitude. The Snow Volleyball European Tour continues to grow and now, with the World Tour, snow volleyball is spreading globally. The players are loving it! 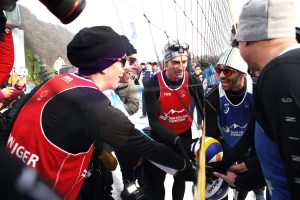 You have been involved in the development of snow volleyball for a long time. Austria House hosted Snow Volleyball Night during 2018 PyeongChang, in partnership with the FIVB and CEV. What can you tell us about the event and how important was it for the development of the discipline?

The FIVB/CEV Snow Volleyball Night at Austria House in Pyeongchang during the Olympic Games turned out to be a huge success. At the exhibition we had volleyball legends playing, such as Kim Yeon-koung, Xue Chen, Stefanie Schwaiger, Nik Berger, Giba, Vladimir Grbic and Emanuel.

More than 45 TV stations as well as 20 photographers covered the event and, among the spectators we had His Serene Highness Prince Albert II of Monaco and about 25 other IOC Members.

The media feedback was great, some of the stations had live coverage for up to half an hour. It really helped to grow the sport. Regarding its continued development, we hope that some of the nations traditionally associated with summer sports will enjoy a flavour of winter sport, through snow volleyball.

Have you ever tried playing snow volleyball? If so – can you share your experience?

Nik and Stefanie gave us a short introduction in PyeongChang, it was great fun. We even persuaded Prince Albert to do a few serves with us!

How has the sport grown in Austria?

It is getting more common for volleyball players in Austria to play on snow during the winter months – especially in mixed tournaments. Star players such as Nik Berger and Stefanie Schwaiger, both former European Beach Volleyball champions, continue to promote snow volleyball. As the Austrian NOC, we are closely watching the development of the sport.

Are you planning to continue working with the FIVB and CEV on the development of the sport?

Whenever we have the opportunity to find synergies, we are more than happy to cooperate again. It has been a great experience for the Austrian Olympic Committee.