Lausanne, Switzerland, October 16, 2019 – The FIVB has opened the bidding process for the next host cities of the Men’s and Women’s 2020 FIVB Volleyball Challenger Cup, which will take place from June 24-28, 2020.

Next year will be the third edition of the Volleyball Challenger Cup, which secures the winner a place in the following year’s Volleyball Nation League (VNL). In 2019, hosts Slovenia won the men’s edition after a straight sets victory over Cuba, while in the women’s competition, Canada overcame the Czech Republic in a five-set thriller in Peru.

The Volleyball Challenger Cup was created as an important feeder event for the VNL, establishing a competition for nations to play top-level matches in world class facilities, with a chance of progressing to one of the FIVB’s flagship tournaments.

It is also an opportunity for fans to watch and engage with volleyball on an international stage, thereby potentially kick-starting a new culture of volleyball in the host country.

“The Volleyball Challenger Cup is an exciting and important tournament for the entire volleyball world,” FIVB President Dr. Ary S. Graça F° said. “With the prospect of securing a place in the VNL, it is an incredibly hard fought competition and we have seen some amazing team performances in the last two years. After Slovenia and Canada’s success this year, I look forward to seeing who will come out on top in 2020.”

Expressions of interest should be received no later than November 18, 2019.

All information regarding the application process can be found at https://www.fivb.com/en/bidding

INDIA AND PAKISTAN CONTINUE TO GROW WITH SUPPORT FROM FIVB 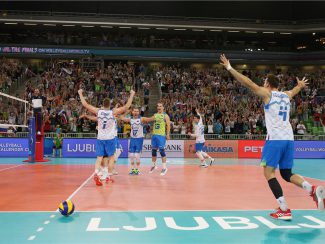