FIVB President Dr Ary S. Graça F° was Monday  presented with the most prestigious award in volleyball – the FIVB Grand Cross – during the 38th FIVB World Congress in Arnhem, the Netherlands.

“It was truly an honour to receive such a special award and from the bottom of my heart I thank the FIVB Board of Administration for presenting this prestigious award to me.

“I have dedicated my life to our beloved sport, both as a player, and then leading the Brazilian Volleyball Confederation, South American Volleyball Confederation and now the FIVB. Volleyball is my passion and I want to see the sport reach its full potential. We are in a place now where my vision for the sport is being realised thanks to the strong foundations we have built since my election in 2012. And I am very excited to see volleyball grow stronger and stronger all around the world in the months and years ahead!”

The FIVB Grand Cross was also awarded to FIVB Vice-President Aleksandar Boričić, President of the European Volleyball Confederation (CEV) and a longstanding leader of volleyball in Europe and worldwide, for his dedication to the FIVB and the Board. 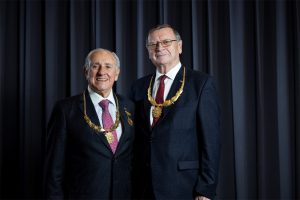 The FIVB Board of Administration also awarded the President of Polsat Television, Zygmunt Solorz, with the FIVB Grand Cross in recognition of his support to volleyball’s development in Poland and beyond.

Meanwhile, Polish volleyball legend Tomasz Wojtowicz, an Olympic Champion in 1976 with Poland, was awarded the FIVB Great Silver Cross for his contribution to volleyball.

Awards were also presented to various National Federations (NFs) of the FIVB on their 75th Anniversaries, including: Belgium, Brazil, Egypt, France, Hungary, Italy, the Netherlands, Poland, Portugal, Romania, Serbia, the USA and Uruguay.

In addition, IOC Member and President of the Nigeria Olympic Committee, Habu Gumel, received an the 25th Anniversary award on behalf of the Nigeria Volleyball Federation.