Rio de Janeiro, Brazil, May 7, 2020 – FIVB President Ary S Graça F° met with leaders from the Western Asia Zone’s volleyball associations via a videoconference from his office in Rio, Brazil to discuss the development and promotion of volleyball and beach volleyball in the region.

The meeting served as an important opportunity for the FIVB President to update his colleagues in the Western Asia Zone about the various measures the FIVB has taken to protect the health and wellbeing of the entire Volleyball Family in light of the global coronavirus pandemic. He also shared his views on sport in the post-coronavirus world, and the ways in which the Western Zone can improve the level of volleyball and beach volleyball in their respective countries once sport resumes. The leaders of the Western Zone supported the ideas outlined by the FIVB President and confirmed their commitment to follow these.

During the meeting, the FIVB President was also updated on the latest activities of a Volleyball Development Centre in Bahrain which supports 22 countries in the Arabic region. Several other topics were also discussed at the meeting, such as the FIVB’s commitment to digitalisation, and the coaching support that can be provided to countries as part of the Nucleus Project through the FIVB Projects Platform.

Following the meeting, the Executive Vice-President of the FIVB and the AVC, Essa Hamza Ahmad Al Failakawi, said:

“Both myself and the leaders of the Western Asia Zone enjoyed the fruitful discussions that were had during this videoconference. We truly appreciate the FIVB President taking this time to share recommendations on how to develop volleyball in our region and update us on his vision for the future of our sport. We will continue to work tirelessly to ensure the continuous growth of volleyball in our region at both the grassroots and elite level.” 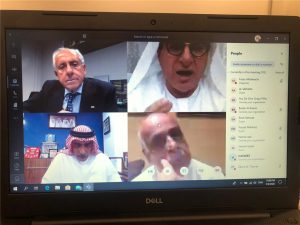