In 2021, the 37-year-old led Japan as captain to their first final four in three editions of the FIVB Volleyball Nations League, before making her final Olympic appearance this summer in Tokyo. 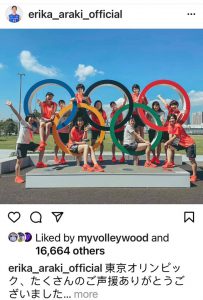 Araki announced on Wednesday that she will retire from competitive sport and will no longer participate in the Japan V.League, which will start mid-October.

“I have decided to retire from active duty,” Araki announced on Instagram. 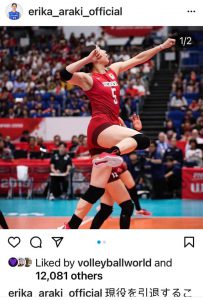 “For 26 years since I started playing at the age of 11, I have been trying to improve my volleyball. I have experienced many enchanting moments and feel that I have been able to fully enjoy the life of a volleyball player. The time I spent towards achieving my goals with many friends, and sharing the joys and regrets are all wonderful and irreplaceable experiences which I will always treasure.”

“I would like to say that being a long-time representative of Japan and playing against the world’s best teams is an honour. To be able to continue my playing career even after marriage and childbirth is such a wonderful experience not only in the world of volleyball and sports, but it also allowed me to serve as a role model for women in our society. And with these experiences, I will carry on with humility and inspiration to always challenge myself.

“I am very grateful to all the people involved in the team and those who have supported me this far, and to all the fans who have continued to support me, the teammates and staff who fought battles with me, and everyone who has been involved in my career.

“At times, playing made me miss my family, especially my daughter, but they have always been there for me. I would like to express my heartfelt gratitude for their healthy growth. I am truly grateful to all of you.”

The Okayama native made the national team selection in 2003 and quickly became an asset to the defence-oriented Japanese squad with her height and quickness.

Araki played for Toray Arrows from 2003 to 2008, then played one season in Italy for Foppapedretti Bergamo. She returned to Shiga-based Toray Arrows and played there from 2009 to 2013 and took a break to give birth to her eldest daughter the following year.

While many female athletes who focus on family life often retire from active duty, Araki returned right after giving birth and became a top player again, with the support of her husband, former rugby national Yohei Shinomiya.

She transferred to Ageo Medics to play from 2014 to 2016 and then to Toyota Auto Body Queenseis, where she played for five seasons before her retirement. 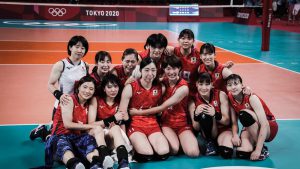 Her almost two-decade-long career produced an Olympic bronze at London and World Championship bronze in 2010. Honours also included a silver at the Asian Games, two Asian Championship titles in 2007 and 2017, a silver and two bronze medals at the continental championship.