The Commission meeting was held in a hybrid format

The FIVB Snow Volleyball Commission on Thursday discussed the global development and growth of snow volleyball during its meeting.

The meeting was attended in-person at the FIVB Headquarters in Lausanne, Switzerland by the FIVB 2nd Executive Vice-President, European Volleyball Confederation President and Commission President Aleksandar Boričić, while the other members joined via videoconference.

Thursday’s discussions were focused on the FIVB Snow Volleyball World Tour and the sport’s development at both a continental and National Federation level. Commission members were also provided with an update on the FIVB’s and Volleyball World’s activities.

FIVB President Dr Ary S. Graça F° was also present at the meeting where he noted the success so far in developing snow volleyball which has rapidly grown in over the past few years. He also noted the huge potential of the FIVB’s newest discipline and the need to continue efforts to ensure its development worldwide. 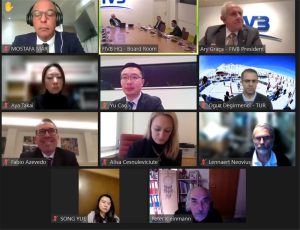 “I want to see more and more people with the opportunity to engage in this young, fun and winter version of volleyball. The future of snow volleyball is truly bright, but we must work together to reach this future. We must work hard with our strategic plan to stimulate the growth of a new generation of snow volleyball athletes. Together, we will lay the foundations for the long-term success of snow volleyball!”

“Since the Snow Volleyball Night at the Olympic Winter Games PyeongChang 2018, the sport has rapidly grown in popularity across the world. The CEV is working in close cooperation with the FIVB to capitalise on this momentum with events in Europe and around the world.”