Gong Xiangyu on the serve

China’s opposite Gong Xiangyu had a great day in the Philippines on Tuesday leading her team to their fourth win since the start of the women’s Volleyball Nations League 2022. The 1.86m-tall spiker powered China in both offence and blocking and was the best scorer and arguably the best player in the 3-0 (25-19, 25-22, 25-14) victory over Belgium in Quezon City.

Improving to a 4-1 win-loss record and 13 points, the Asian powerhouse regained the second place in the current VNL standings, behind only undefeated Japan, while their European opponents occupy the 12th position on 1-4 and 6 points.

The first set of the match was quite competitive through 12-12, when Wang Yuanyuan delivered the first ace of the game. In a way, that gave her team the momentum to increase the pressure and break away in the score, also capitalising on Belgium’s abundant unforced errors. Gong’s fifth successful spike of the set closed it off at 25-19.

A fierce battle through most of the second set led to an even score at 22-22. Gong finished a long and spectacular defensive rally with a productive swing for 24-22, and then monster-blocked for the 25-22 set winner and her 10th point in the set.

In the third set, China ran off with a 10-5 lead with four points in a row on Gong’s turn to serve. Their setter Ding Xia scored beautifully with a hit on two for 13-8 and went to the serving line to help widen the gap to 15-8. A well-placed shot by outside hitter Jin Ye brought in the match point at 24-14. Another smart hit by Jin got the Belgian defence confused and forced them to commit an unforced error for the last point. 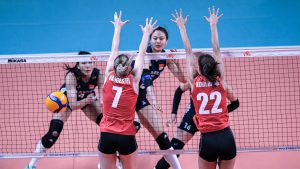 Gong swings past the Belgian blockers

Gong piled up 16 spiking points at an amazing success rate of 70% and added three kill blocks towards the match high of 19 points. Only two other players in the match – Belgium’s outside hitter and captain Celine Van Gestel and opposite Pauline Martin – reached the double-digit mark in scoring with 11 points apiece.

“We had a good performance in this game, but I hope we can make some more improvements from one match to the next,” said China’s middle blocker and captain Yuan Xinyue.

China will play against Canada next on Friday before the weekend’s thrilling encounters with two of their main rivals for the top of the table, USA on Saturday and Japan on Sunday. Belgium’s next matches in the Philippines include meetings with Canada on Thursday, with Poland on Saturday and with Bulgaria on Sunday.

In Tueday’s first match in Quezon City, defending champions USA produced a 3-0 (25-20, 25-22, 25-20) shutout of Bulgaria outplaying their opponents on all counts to rise to a 4-1 win-loss record and 12 points in the third place of the current standings. Outside hitters Kelsey Robinson of USA and Miroslava Paskova of Bulgaria shared the top scorer honours on 14 points apiece. The European team are 13th in the table on 1-4 and 3 points.

HONG KONG,CHINA RECRUIT SCIENTIFIC TRAINING TEAM TO GET WELL-PREPARED FOR COMPETITIONSFIVB AND VOLLEYBALL WORLD UPDATE ON COVID-19 PROTOCOLS AT VNL 2022