GRIMALT AND GRIMALT TO RETURN TO DEFEND DOHA TITLE

Lausanne, Switzerland, February 19, 2020 – Marco and Esteban Grimalt will return to Doha to defend the 4-Star Katara Open gold they won in 2019.

The Chilean cousins won their first 4-Star gold when they defeated the USA’s Phil Dalhausser and Nick Lucena 2-0 (21-15, 21-15) in the gold medal match.

Lucena and Dalhausser will also be back in action and are one of six USA teams on the entry list.

Qatar field three teams with Cherif Younousse and Ahmed Tijan aiming to repeat their performance in 2018 when they won bronze.

Doha will host its second FIVB Beach Volleyball World Tour of the 2019-2020 season with the 4-Star Katara Open, having hosted the 1-Star Aspire Beach Volleyball Cup at Al-Gharrafa Beach Complex in November.

FIVB Beach Volleyball world champion Oleg Stoyanovskiy also returns to Doha, where he and Igor Velichko won silver in 2018. He finished ninth with Viacheslav Krasilnikov in 2019, but four months on they topped the podium at the Hamburg 2019 FIVB Beach Volleyball World Championships.

The men-only tournament will run from March 9-13 at Katara Cultural Village in the north of the city. It is the second 4-Star event on the 2019-2020 calendar and the winners will leave with 800 ranking points. 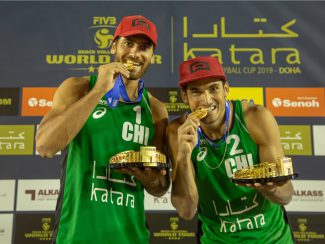