Quangninh, Vietnam, May 19, 2022 – Indonesia set up the 2019 SEA Games final rematch with Thailand in both men’s and women’s events in the 31st Southeast Asian Games Beach Volleyball Tournament at Tuan Chau Beach here on Thursday.

In the women’s competition, reigning champions Thailand made a clean sweep of five wins in the single round-robin preliminaries. On Thursday, the final day of the preliminary encounters, Thailand remained unbeatable after pulling off sensational 2-0 wins against Philippines.

Asian champions Taravadee Naraphornrapat/Worapeerachayakorn Kongphopsarutawadee performed brilliantly to get Thailand off to a flying start with a thrilling 22-20, 21-15 win against Filipinas Cherry Ann Rondina/Bernadeth Pons, while Varapatsorn Radarong/Tanarattha Udomchavee, silver medallists at the 2014 Asian Games in Incheon, Korea, cruised to a convincing 21-18, 21-15 victory against Jovelyn Gonzaga/Floremel Rodriguez for the eventual 2-0 wins against the Filipinas.

The host side, cheered on by home crowds at the Tuan Chau Beach, clawed their way back in the second match when Truong Duong Thai My Huyen/Nguyen Thi Thanh Tram downed Nur Sari/Sari Hartati 21-15, 21-18 to force the golden match to decide the eventual winners.

However, Dhita Juliana/Putu Utami came out at the right time to save the day for Indonesia when the superb duo put it past Nguyen Vu Ngoc Lan/Nguyen Le Thi Tuong Vy 23-21, 21-13 for the Indonesia’s eventual 2-1 wins.

At the end of the single round-robin preliminaries on Thursday, Thailand made their mark to capture the top spot with five wins in a row, followed respectively by Indonesia with four wins against one loss, Philippines with three wins against two loss and Vietnam with 2 wins against 3 losses. Malaysia tasted the first victory in the 31st SEA Games following their 2-1 wins against Singapore.

On Friday, Thailand set up the final showdown with Indonesia, the team they had already beaten 2-0 in the preliminaries. The highly-anticipated clash turned out to be the 2019 SEA Games final rematch. At the 30th edition in Philippines, Thailand powered past Indonesia to reign supreme.

Indonesia and Thailand will also battle it out for the SEA Games title in the men’s final on Friday. Thailand have already lost 1-2 to Indonesia in Pool B, but joined the formidable rivals in the semifinals as the Pool B second place. Philippines emerged as the top spot in Pool A, with Vietnam finishing second in the Pool.

In the Friday’s final showdown, Thailand will go up against Indonesia, which shattered the hopes of the host nation following their 2-0 wins in the do-or-die semifinals.

Indonesians Ade Rachmawan/Mohammad Ashfiya, silver medallists at the 2018 Asian Games on their home soil, proved a cut  above Nhat Ton Long/Nguyen Van Nha to beat the Vietnamese pairing 21-15, 21-16, while the second match saw Gilang Ramadhan/Rendy Licardo recover from the first set down 17-21 to take the remaining two sets 21-14, 15-10 in the tough-looking match against Nguyen Lam Toi/Trang Quang Vu. 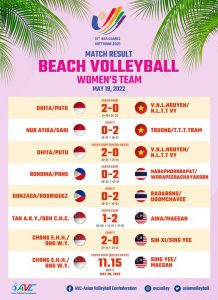 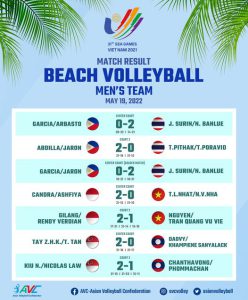