Supreme’s team manager Thanadit Prasopnetr revealed that the short-and-fixed term contract will come into effect on the effective date and will be ended after the conclusion of the Super League tournament. The contract will certainly offer his team an opportunity to improve offensive competitive strategy and regain their confidence.

“In the Thailand League preliminaries this season, we (Supreme) did not perform well offensively. To strengthen our team, we decided to sign a contract with Manganang. With her explosive performance and talent, I’m upbeat that she will bring out her best effort and my team will come up with our remarkable form to accomplish our goal eventually,” he added.

Mr Thanadit admitted that Manganang will have a short time to adjust herself to the Thai team, but still believed she will learn things around fast as she already played in the same team with Thai setter Pornpun Guedpard in the completely-ended Indonesian Proliga, where their team Jakarta PGN Popsivo Polwan reigned supreme, with Manganang and Pornpun winning the MVP and Best Setter awards respectively.

Following the signed contract, the strongly-built Manganang became the first Indonesian volleyball player who will play as an overseas import. She has already made her mark in several tournaments including the 2017 Southeast Asian Games in Kuala Lumpur, where she steered Indonesia to winning silver.

“I’m glad and very excited because this is the first time I will join an overseas team. I will give my best. It’s an honor that I can join Supreme which contains some great Thailand national players, and certainly I will get a lot of experience and lessons from them,” Manganang was quoted as saying.

Supreme, powered by two highly-experienced players Wilavan Apinyapong and Pleumjit Thinkaow, will represent Thailand in the next month’s Asian Women’s Club Volleyball Championship in Tianjin, China. The Thai team captured the Asian crown twice in 2017 and 2018 in Ust-Kamenogorsk, Kazakhstan on both occasions. 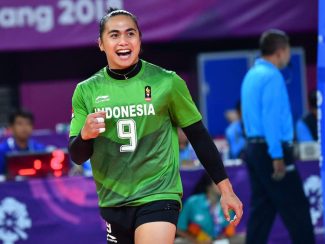