The meeting was the first to be held between the IOC Executive Board and the FIVB Executive Committee, and volleyball also became the first International Federation to hold a joint meeting with the IOC at their new headquarters, which was officially opened in June, 2019.

FIVB President Dr. Ary S. Graça Fᵒ shared important statistics that highlighted the work of the FIVB to engage with fans around the world. Following the FIVB’s presentation, President Bach congratulated the FIVB on its efforts to innovate and highlighted the success of the Volleyball Nations League.

“We are very pleased to have one of our most successful Olympic International Federations here with us. You understand what it means to be a global sport and all the challenges you may face. In the middle of these challenges, you have anticipated many of these developments already, and therefore I am very confident that we will have a very fruitful meeting today.

“Your motto is innovation, and we say the same but in different words. Change or be changed. If we want to keep our relevance, we have to innovate, we have to change, otherwise we will fall behind and potentially disappear. Today, we are sharing the approach to these challenges. We look forward to your presentation here and to our following discussion together.”

The two organisations also talked about the importance of gender equality, and President Ary Graça outlined how the FIVB was working hard to promote women’s sport globally. The FIVB President also explained that, off the court, the FIVB headquarters employ an equal number of male and female staff, with 45% of FIVB Directors being women.

“Family values and gender equality are very important for us,” the FIVB President said. “It is our aim to be the world’s number one family sport, and the FIVB has always used its platform to promote and empower women and girls.

“On the field of play, our women’s teams receive the same prize money and coverage as the men’s teams, and both men’s and women’s sport also deliver the same financial results. I believe this stands us apart from many other sports.”

Other subjects discussed included an update on the autonomy of sports and non-discrimination, anti-doping, good governance, and preparations for future Olympic Games and Youth Olympic Games. IOC Director Kit McConnell highlighted the success of the FIVB at recent Olympic Games, particularly the Rio 2016 Games, where women’s volleyball was the most viewed event across the entire Olympic programme. McConnell also praised the FIVB’s engagement and sports presentation efforts, both for fans in the stadium and those watching and interacting digitally around the world.

“The way the FIVB has continued to drive the fan engagement and spectator presentation is something that we support and that we’re looking to partner with. Looking ahead to Tokyo 2020, we have some great venues for beach volleyball and volleyball. The ticket demand is incredible and we are on track for an amazing Games in Tokyo.”

During the meeting, Cuba’s triple Olympic champion and FIVB Executive Vice-President, Luis Hernandez Alejandrina Mireya, officially received her OLY status from President Bach. Mireya won gold as an outside hitter for Cuba’s national team at the Barcelona 1992, Atlanta 1996 and at Sydney 2000 Olympic Games.

The meeting concluded with the two presidents agreeing to work closely together for the good of the Olympic Movement and the sharing of the Olympic values around the world.
“This was an excellent opportunity to exchange our views and show our respective positions on different issues,” President Bach said. “This has given us the opportunity to strengthen our cooperation. Thank you for your presentation and for the attitude behind your presentation.” 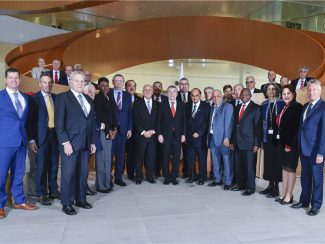