Manila, Philippines, December 4, 2019 – Hosts Philippines and Indonesia captured two straight wins in Pool B on Wednesday, with the former overpowering Vietnam in straight sets and the latter beating Cambodia in dramatic fashion to secure their semi-final berths at the 30th Southeast Asian Games men’s volleyball competition at Philsports Arena in Pasig City. 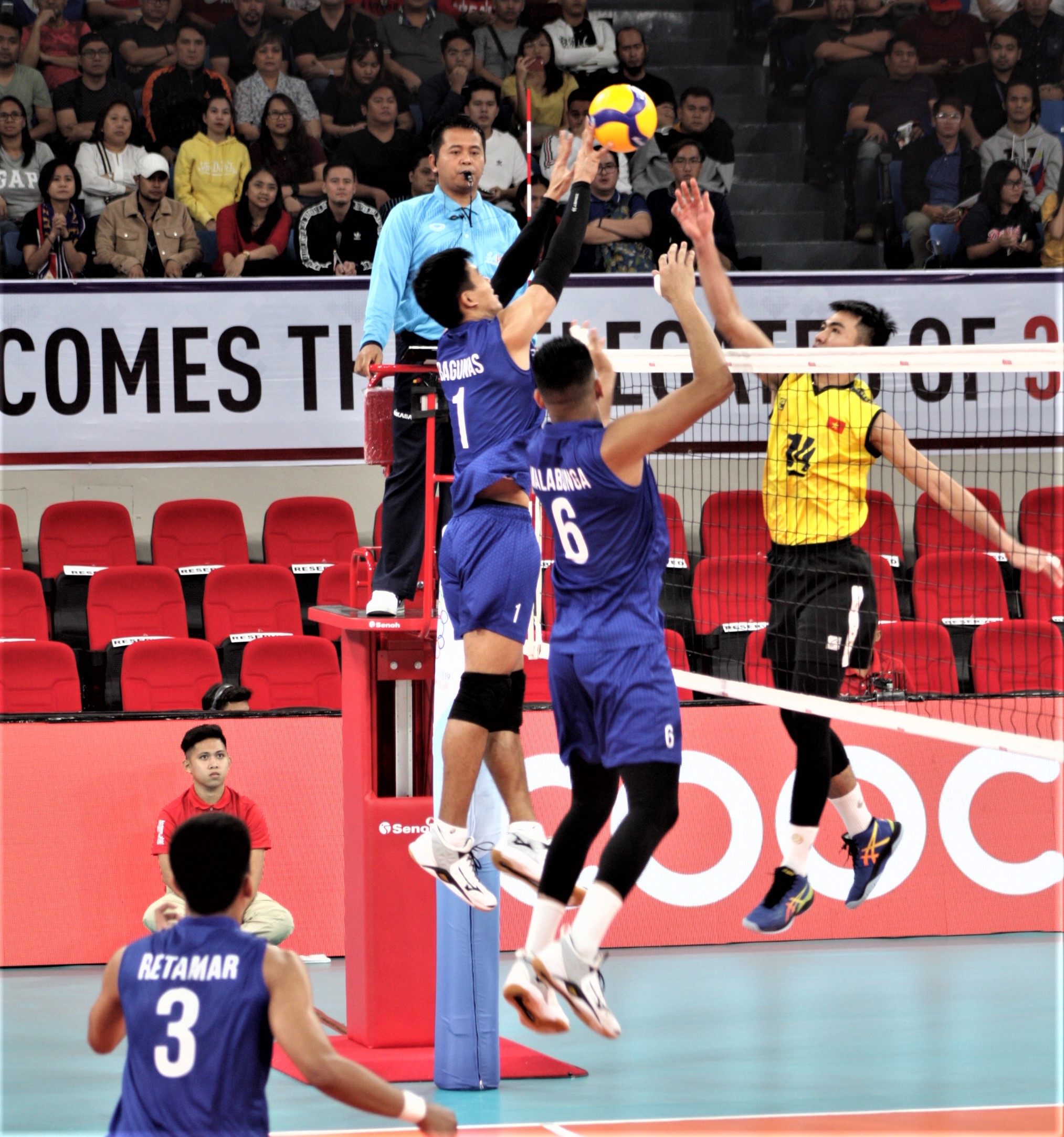 The host side will next go up against Indonesia in their last preliminary match on Friday to decide the Pool B winners. However, both teams have already beaten Vietnam and Cambodia and the two consecutive wins had already guaranteed them places in the top four. 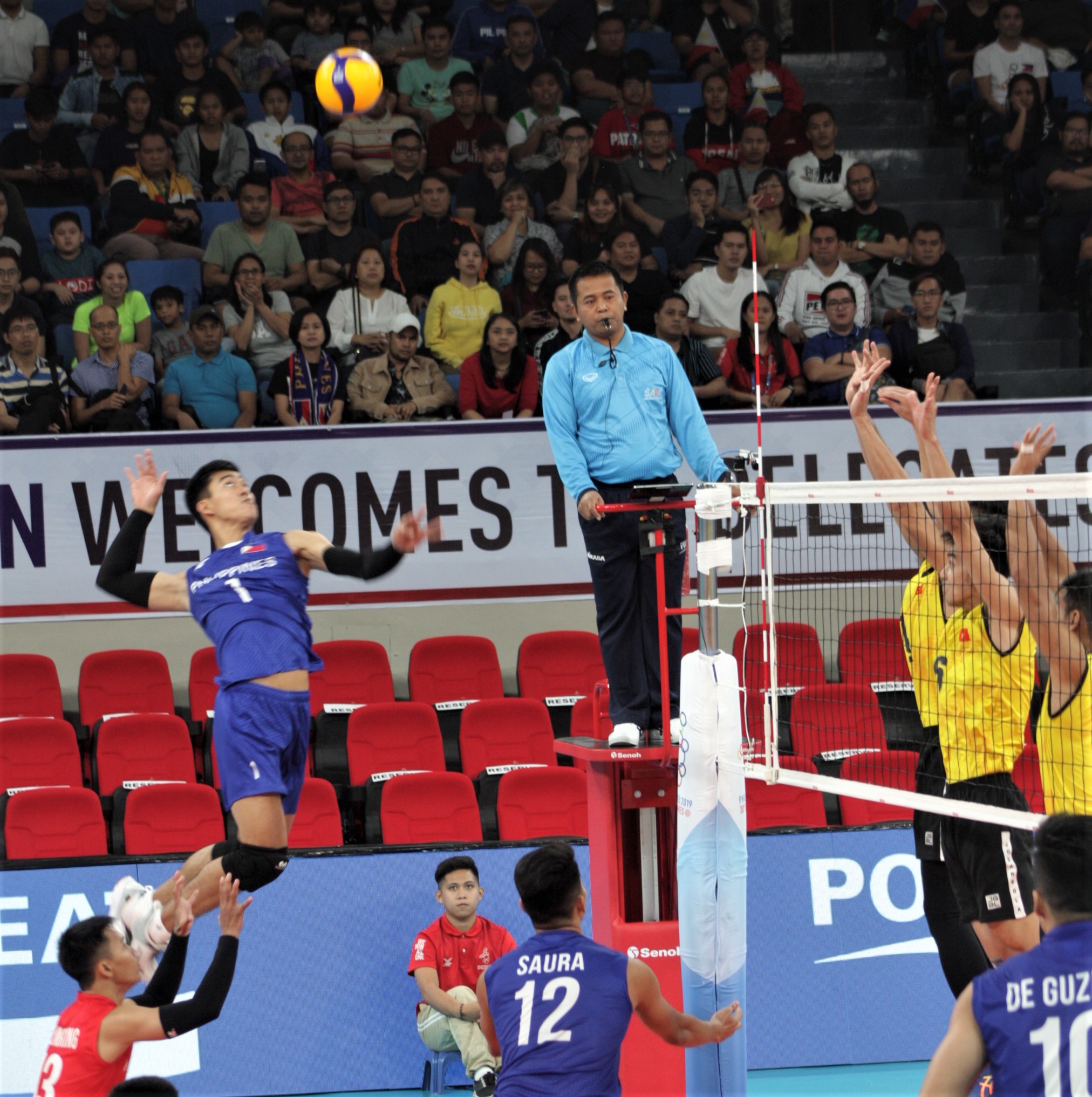 Indonesia, which ruled the roost at the SEA Games men’s volleyball history with 9 gold medals, outclassed Vietnam 3-0 in their first clash to next shut out Cambodia 3-0 on Wednesday, while hosts Philippines did likewise to beat Cambodia 3-0 in their opening match before pulling off a stunning 3-0 win against Vietnam.

In the Pool B matches on Wednesday, Indonesia, aiming to end the 10-year gold-medal drought since they last emerged the SEA Games champions in 2009 in Laos, put on a good show in a tough match against Cambodia, which have yet won a SEA Games medal in history.

Brilliant Rivan Nurmulki chipped in with powerful attacks, while Rendy Febriant Tamamilang also troubled the rivals with his spectacular cross-court spikes to help Indonesia take the first two sets 25-20 25-17. Nevertheless, Cambodia started to pick things up and clawed their way back in the third set, with hard-attacking Mom Kuon in particularly on good form. Both teams were neck and neck, closing a very long rally, but the highly-experienced Indonesians proved a cut above the spirited rivals to win the thrilling set 35-33 and match.

Indonesia proved a strong contender for the SEA Games title this time. They performed superbly at the 2017 Asian Senior Men’s Championship on home soil in Gresik to become the first Asean team ever to reach the tournament’s top four. In this year’s Asian meet in Iran, Indonesia tested their mettle against arch rivals Thailand in the 11th-12th playoff clash, but just went down to the stronger Thais in thrilling tie-breaker. 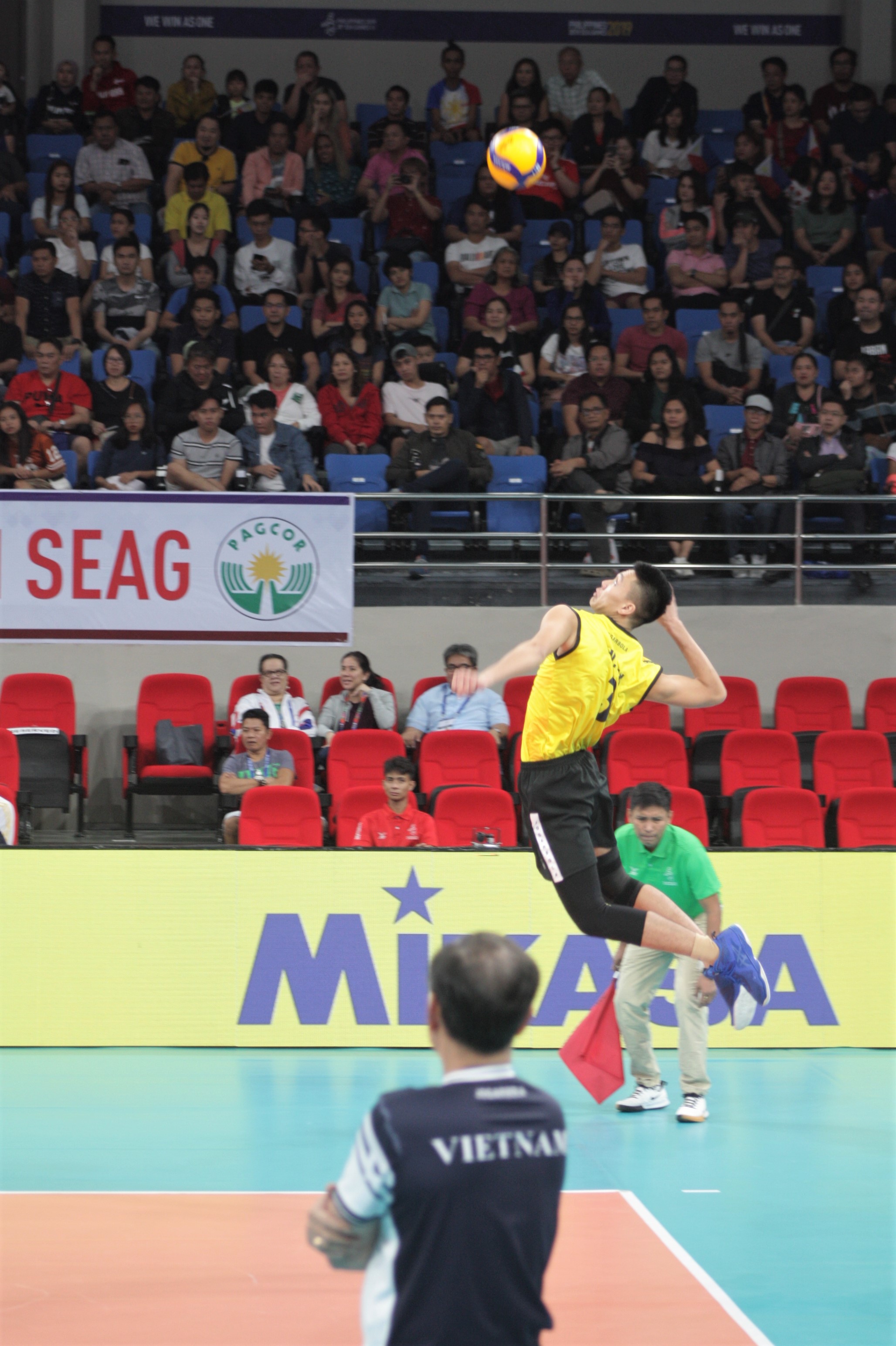 In the other Pool B clash, hosts Philippines, which have yet landed the SEA Games title, but have their sights firmly set on capturing their maiden victory on home soil this time, routed Vietnam, bronze medallists at the previous Games in Kuala Lumpur, Malaysia two years ago, in thrilling three-setter 25-20 25-21 25-12.

Bryan Bagunas chipped in with 22 points for the Philippines including 17 attacks from 35 attempts and a team-leading 3 aces, while Tu Thanh Thuan led Vietnam with 15 points.

Philippines had trained hard in their preparation for the SEA Games campaign at home. They took a 16-day encampment in Tokyo, Japan and played 12 tuneup matches out there, making them well-prepared and one of the strong teams to be reckoned with in the 30th edition. 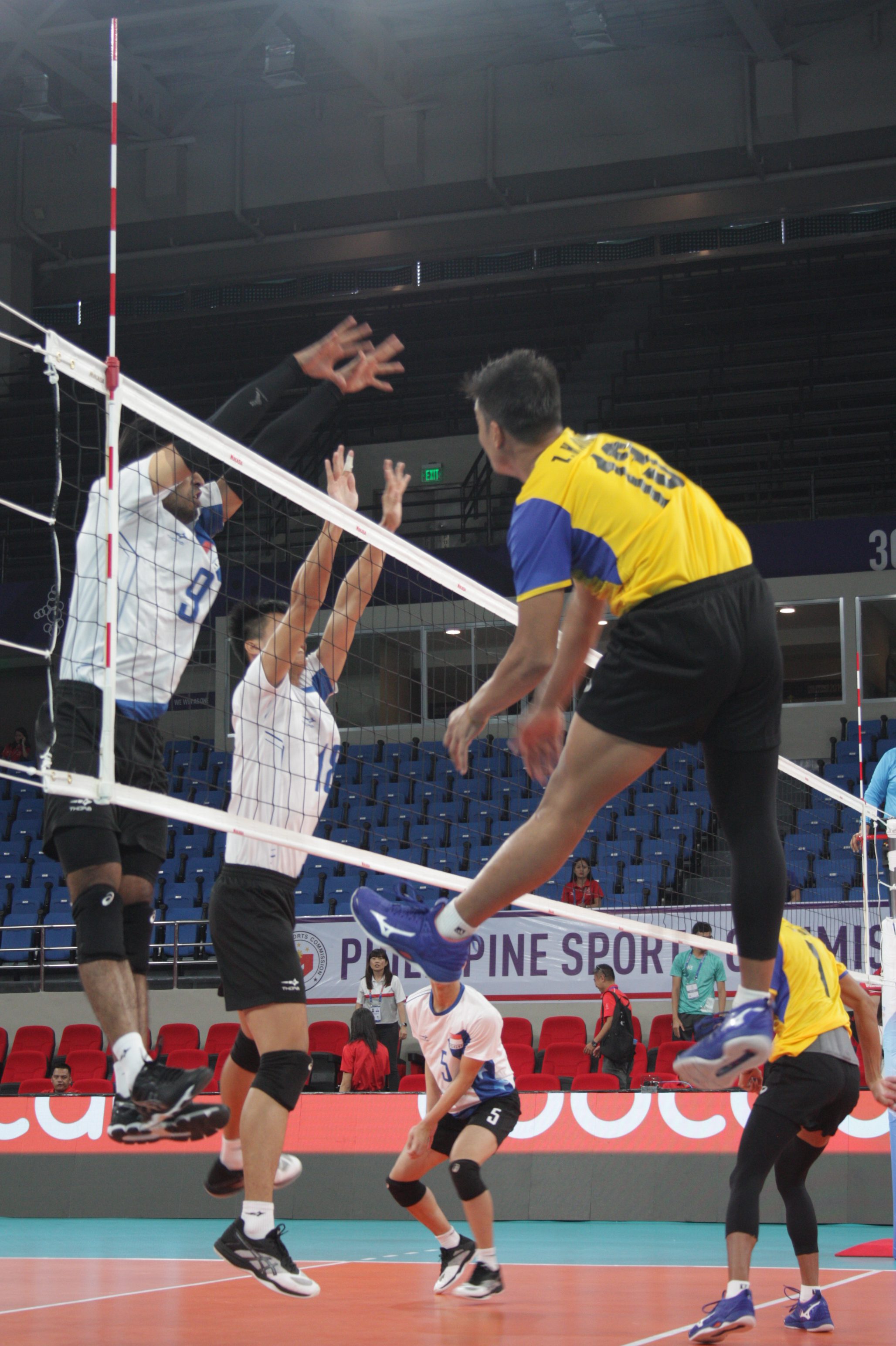 Earlier, Myanmar survived a Singapore’s first-set scare to cruise to an exceptional 3-0 (26-24 25-21 25-18) win in Pool A. With only three teams competing in Pool A and Singapore succumbing to two straight losses, reigning champions Thailand and Myanmar have made the cut for the semi-finals, as both teams are due to take on each other in their last preliminary match on Friday, vying for the Pool A top spot.

The men’s competition will have one day off and resume on Friday, with the women’s event taking place on Thursday. 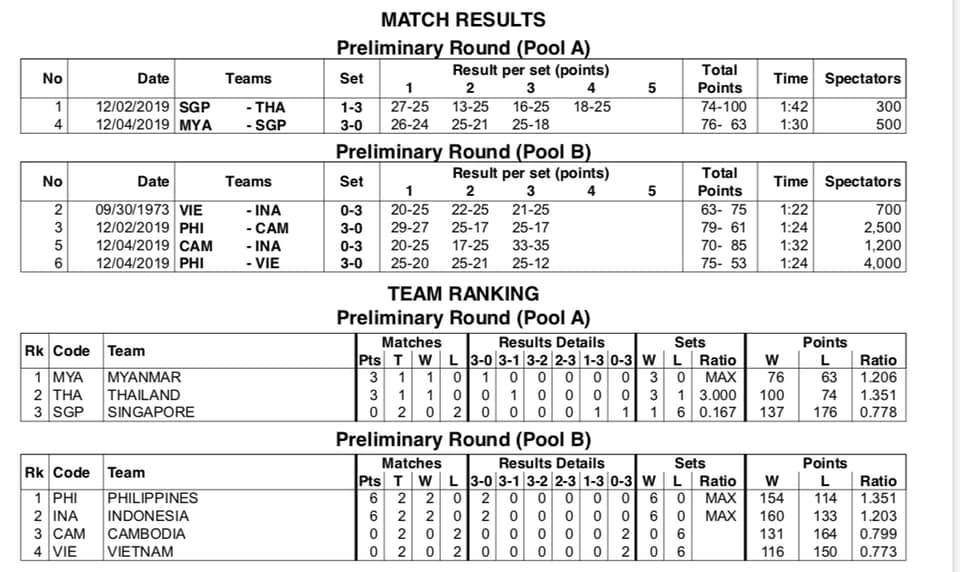 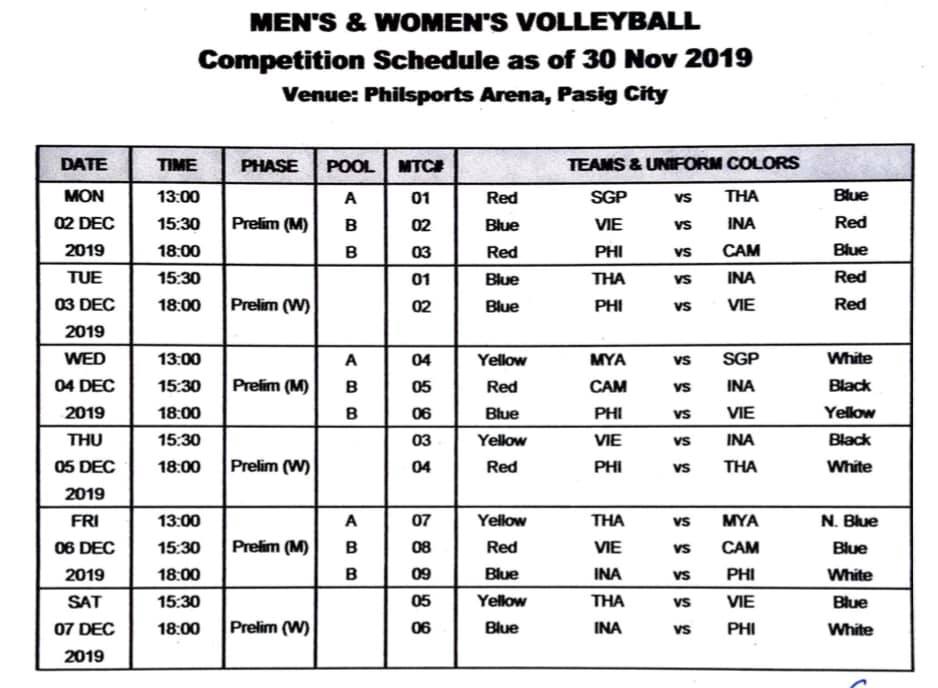 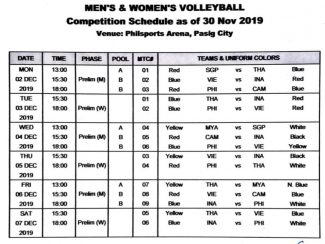 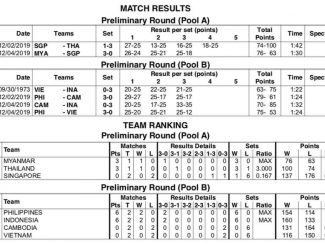 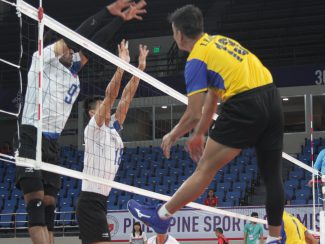 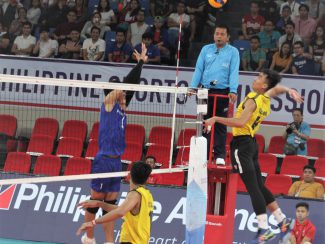 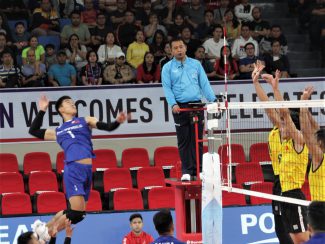 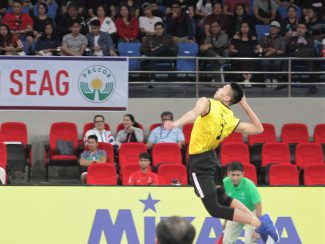 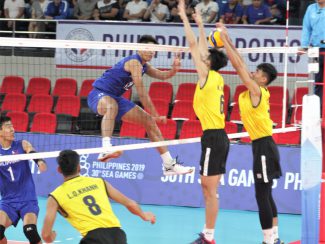 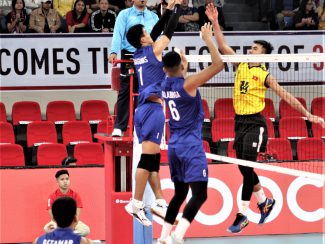