Iran libero Sajjad Jelodarian promises bright future for the country’s volleyball, as he stars at the 2021 FIVB Boys’ U19 World Championship in Tehran.

Although latest results at the delayed Tokyo 2020 Olympic Games may have disappointed a huge and passionate community of volleyball fans in Iran, the country is building a new generation to follow in the footsteps of the legends that came before them – and maybe achieve new heights that their predecessors only managed to dream of.

And what better a place and time to showcase this new generation than at home in Tehran where the 2021 FIVB Boys’ U19 World Championship is now in full swing.

Libero Sajjad Jelodarian is one of Iran’s key players in their effort to shine at this U19 World Championship.

A carry-over from the previous edition, in 2017 in Tunis, Jelodarian is also the only player from the U19 squad to have been entered for the 2021 FIVB Men’s U21 World Championship scheduled for next month in Italy and Bulgaria.

Hailing from Tehran so playing at home at the this year’s U19 World Championship, Jelodarian has been inspired by some of the great players that the Iranian capital has produced.

“I chose to play volleyball because of some of the senior players who were living in my city like Farhad Nazariafshar, Pourya Fayazi, Mostafa Heidari,” said the 18-year-old. “I always followed their playing and got interested in it.”

“So I could not help it, now that I am into it. I now cannot think of any other thing but volleyball.”

But Jelodarian has high ambitions for his developing career, as he looks up to his idols.

“I would firstly love to play for the senior team under the national flag and to be able to play in the Italian League,” he says. “My volleyball idols are [libero Jenia] Grebennikov of France and our own [two-time Olympian outside hitter Milad] Ebadipour of Iran.” 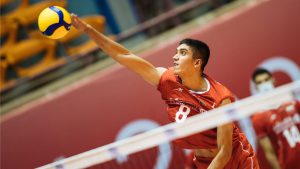 Iran opposite Amir Golzadeh looks to Italy’s Ivan Zaytsev for inspiration as he forges his career in international volleyball.

At 2.05 metres, the towering Amir Golzadeh is also an instrumental player in Iran’s aspirations at this U19 World Championship and personally looks forward to a promising career.

“My father pushed me to play volleyball and I got to love it,” says the 18-year-old opposite, who scored 8 points in Iran’s opening match at the Boys’ U19 World Championship against India. “I really owe my family for helping me find my way in life and staying on the right track.”

“My aspiration in volleyball is to be the world’s best player both in terms of technique and ethics. I would love to run a good life,” added Golzadeh, who looks up to Italy’s Ivan Zaytsev for his volleyball inspiration.